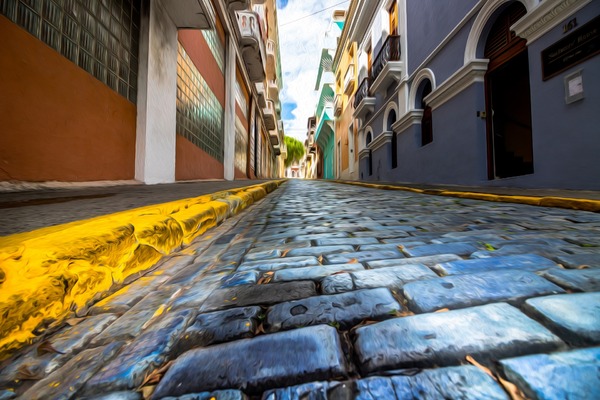 The rental sign hangs on the outside of a San Juan apartment building. From the second floor window, you can see the Caribbean Sea, from the ground floor, a four-lane road and the beginnings of the Old Town’s boardwalk. The building has been for rent since the hurricane, but the landlord is hoping to attract a new generation of Puerto Rican.

For approximately the past six months, blockchain companies have steadily begun migrating to this American territory in the Caribbean. By some counts, more than 50 different related entrepreneurs have brought their companies (or, in some cases, intended companies) all chiefly to the capital city of San Juan. They are hoping to build the next Silicon Valley out here, a sun-and-sand version of Santa Clara, with some predicting that soon hundreds of companies will relocate to follow them.

They have begun, if not a movement, then certainly a scene. In March, San Juan hosted the Blockchain Unbound cryptocurrency conference, just one of three major conferences on the subject held this spring. The event filled the sprawling Condado Vanderbilt, booking more than 500 companies and would-be CEO’s, along with many more individuals who came to hear the ideas blockchain enthusiasts are bringing to the island.

They have found a warm welcome. The government has responded so enthusiastically that Puerto Rico is expected to launch its own cryptocurrency this summer, along with a bank that accepts digital tokens. For the beleaguered Caribbean territory, first wracked by one of the worst debt crises in the United States and then two major hurricanes, a new industry backed by billions of dollars and a high-value workforce could be a near-godsend.

“The technology sector has been one of the key areas of our focus,” said Manuel Laboy, Secretary of Economic Development and Commerce for Puerto Rico. “It has been a growing sector specifically because we have a number of tools associated with tax incentives that have caught the attention of some of the entrepreneurs and investors and the business community.”

“Of course, most recently there’s been a greater push and focus. We believe that it has not only the potential to stimulate economic growth, but also within the context of the natural disasters that hit the island last year, more than ever this will be essential for the greater strategy of reconstruction and recovery.”

Those tax incentives, known collectively as Act 22/20, are a major factor that many entrepreneurs cite when they talk about relocating to Puerto Rico. While in common parlance these tax laws are referred to jointly, they are individual laws, Act 22 and Act 20, which give substantial breaks to service businesses and investors who live and operate from the island.

Thanks to Act 22 and Act 20, businesses on the island can enjoy all of the protections of American courts and law with limited corporate taxes and no capital gains tax. Paired with the fact that Puerto Rican residents pay no federal income tax, due to federal disenfranchisement, many entrepreneurs see the island as a potentially lucrative base from which to launch new businesses.

While Hurricanes Irma and Maria still loom large over day-to-day life in Puerto Rico, for many cryptocurrency entrepreneurs this is a feature, not a bug.

Speaking with attendees at Blockchain Unbound while they milled in the lobby of the Vanderbilt, many expressed excitement about a “fresh start” for Puerto Rico. Federal emergency crews have restored power to much of the island, and the utilities in San Juan itself are (at time of writing) largely consistent and stable. Many of these entrepreneurs are confident that not only are the worst of Puerto Rico’s infrastructure problems behind it but that the newly built power and connectivity grids will be more durable than before.

The destruction left behind by the hurricanes created an opening, and many of these incoming companies hope to fill it.

There is, of course, a more dangerous side to cryptocurrency. As the industry catapults past its own market valuations day after day, government regulators like the Securities and Exchange Commission have taken an increased notice. Fraud in the sector has grown with its value, attracting further attention still. Many in the cryptocurrency community have begun to chafe against the resulting amount of contact with the government. For a movement built on transparency, self-sufficiency, and a blend of techno-utopian/techno-anarchist philosophy, this may have been inevitable.

It is something that government representatives say they intend to keep an eye on.

“We want to be a real player,” Laboy said, “[but] the fact that we want to do that doesn’t mean that we don’t want to do it in a responsible way.”

“The actual application of cryptocurrency and the fact that it is a relatively new emerging sector does pose a number of things that we have to look at from the regulatory standpoint. We are in the process of evaluating that in Puerto Rico as we speak.”

Nevertheless, for the time being, both entrepreneurs and the island’s representatives remain to all appearances excited about this potential next chapter for Puerto Rico. If the cryptocurrency movement can grow this project as quickly as it has every other, a new Silicon Valley may just be the beginning.