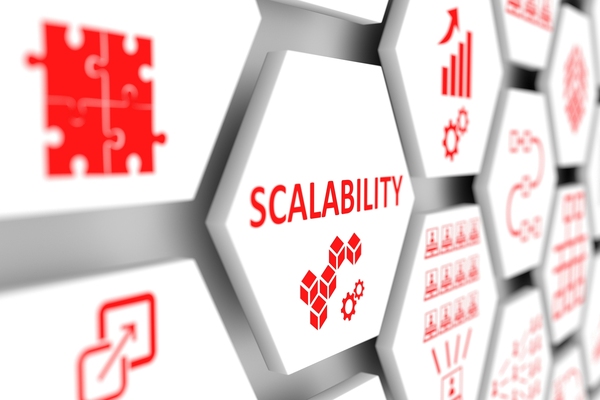 When bitcoin first gained notoriety as an alternative form of digital money, many advocates of the technology, especially those located in Silicon Valley, mostly talked about the relatively low-cost and instantaneous nature of the transactions; however, the blockchain technology behind bitcoin is actually much less efficient than traditional, centralized systems such as PayPal.

While bitcoin transactions were practically free in the early days, the cost of a single transaction rose to over $40 (on average) near the end of 2017. These increased costs were due to the massively increased demand for transacting on the blockchain at the time, which was related to everyone wanting to gain exposure to the booming bitcoin price.

Without the proper development roadmap, many cryptocurrency networks will be unable to scale to millions of new users over the coming years.

Let’s take a closer look at why bitcoin and altcoin investors must understand scalability before making any changes to their portfolios.

Blockchains are built to be permissionless and censorship-resistant, but this comes at a huge cost in the form of decentralization. Instead of having one counterparty verify and process all transactions, users are responsible for verifying their own transactions when using a blockchain. This means that the scalability of any blockchain is limited by the resources needed for users to operate their own full nodes.

This aspect of blockchain technology is often referred to as CONOP (cost of the option to run a full node).

Due to this need for users to be able to process blocks of transactions on their own devices, the amount of data sent around the network (and therefore transactions per second) must be somewhat limited. If the computational resources required to keep up with the network are too cumbersome, then the network will become more centralized and less resistant to censorship because no one will want to run their own full nodes. On the other hand, a network that is far too limited in terms of the amount of data that needs to be processed with every new block leads to a less useful blockchain with fees that are far too costly.

Scaling Via a Layered Approach

Due to the desire for blockchains to have high levels of both throughput and decentralization, many proposals for scaling these systems to a global userbase are built around using block space more wisely.

For example, Bitcoin’s Lightning Network creates a secondary network on top of the base Bitcoin blockchain that allows users to transact with each other more directly and avoid touching the blockchain for smaller-value transactions that do not need to be stored in a global, decentralized database for all eternity.

Anyone who is interested in altcoin investments needs to take a hard look at the claims made by the creators of specific projects and determine whether or not these systems will actually be able to scale to millions or billions of users over the long term. Much like bitcoin in its early days, transactions on pretty much every altcoin network are basically free. Of course, prices will rise if more people decide to actually use these alternative cryptocurrency networks.

At the end of the day, what matters most when it comes to scalability is how prepared a network is for mass adoption, should it ever take place. Developers for all of the major blockchains are currently working every day to find that perfect balance between decentralization and usability.