According to an analysis by patent research experts Envision IP, a number of private and public companies have filed for blockchain patents in the last few years.

Here’s a complete list of public-traded companies who have filed for blockchain patents. You can use it to identify ways to add indirect blockchain exposure to your equity portfolio by purchasing stocks in these companies.

Complete List of Publicly-Traded Companies with the Most Blockchain Patents 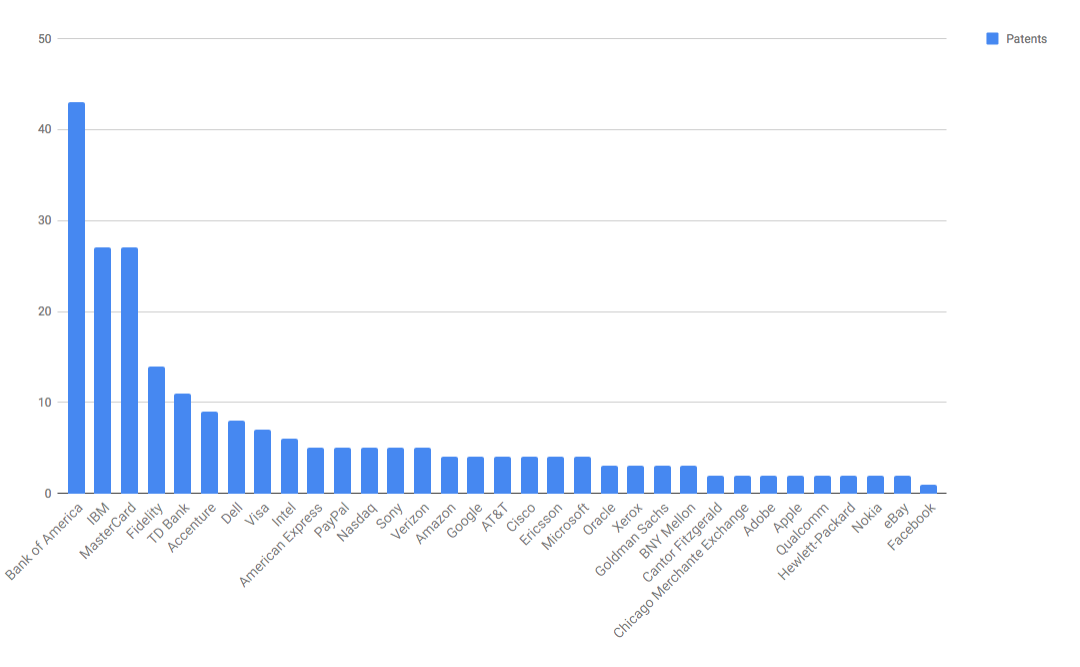 It comes as no a big surprise that the largest blockchain patent holders outside the blockchain startup community come from the technology and financial services industry.

Envision IP reviewed blockchain patents for all US companies. That includes patents for digital currencies, digital asset exchanges, blockchain algorithms and infrastructure, blockchain-based front- and back-end applications, and any other kind of distributed ledger-based technology. General purpose cryptographic and encryption-related patents were not included in the study.

Banks and Credit Card Processors: In the financial industry, banks and credit card processors are the biggest patent holders. Given that blockchain technology can be used to securely and cheaply send and receive payments, the high number of patents among banks and payment providers makes sense.  Among the top ten biggest blockchain patents holds in the US are:

Exchanges and Asset Management: Two leading US exchanges, Nasdaq (holding 5 patents) and CME (holding 2 patents), are also blockchain patents holders while Fidelity is the only asset management company on the list, with 14 patents held. As these three companies have expressed strong interesting in cryptocurrencies and blockchain technology, their patent filings are clearly expressions of their intent to follow through on their desire to become early adopters of this innovative new technology.

In the technology sector, the largest patent holders are:

IBM is betting heavily on the blockchain and has managed to establish itself as a major blockchain technology partner, involved in a wide range of blockchain proofs-of-concept in several different industries. Hence, finding IBM among the biggest blockchain patent holders was to be expected.

Interestingly, technology giants Google, Apple, and Facebook are lower down in the ranking and have only filed for four, two, and one patent respectively to date.

In the retail sector, blockchain patents holders include:

Blockchain patent filing is likely to increase as the blockchain market continues to grow and cryptocurrency-based applications become more mainstream. Additionally, as more regulation enters this space, which will make it more investor-friendly, more patent filing will likely follow as companies will look to protect their new proprietary technologies.

Indirect Investing in the Blockchain Revolution

At this stage, you may be asking yourself what the relevance of blockchain patents is to you as an investor.

If you believe that blockchain technology will play a major role in the future, then one way to gain investment exposure to this innovation is by purchasing stocks in publicly-traded companies that hold blockchain patents.

Of course, when investing in stocks, other factors (such as the financial health and growth prospects of the company you want to invest in) also need to be taken into account when deciding to add new holdings to your portfolio.

Purely from a “blockchain investor” point of view, however, the above-listed companies with the highest number of blockchain patents could potentially provide good indirect exposure to the future success of the blockchain.

Moreover, purchasing stocks in these companies is much easier and lower-risk than investing in ICO tokens or digital currencies directly, which is currently the most common way to invest in the blockchain revolution.

If you want to learn more about blockchain technology and digital currencies, subscribe to the Bitcoin Market Journal newsletter today and join our vibrant community of like-minded investors!