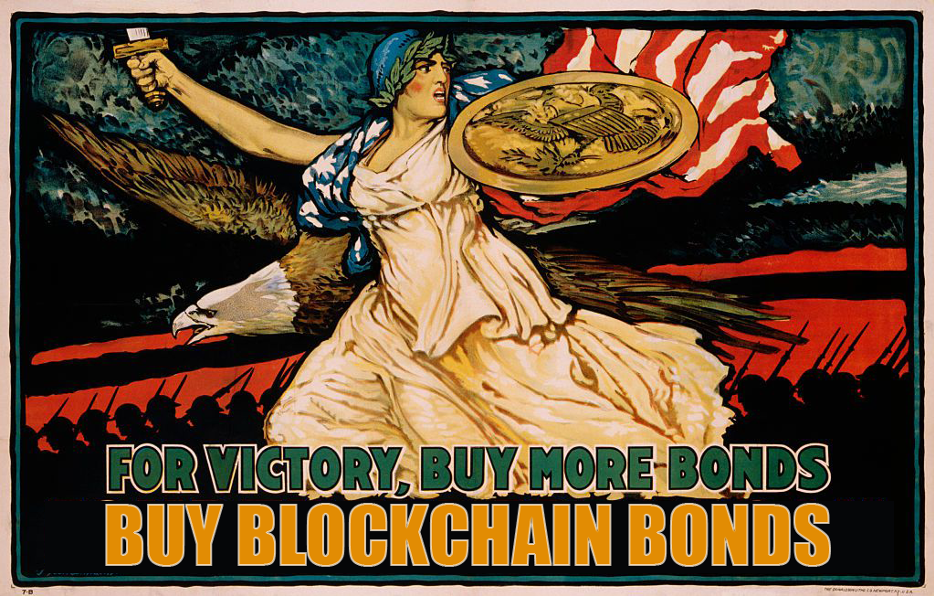 Any great war must necessarily be a popular movement. It is a kind of crusade; and like all crusades, it sweeps along on a powerful stream of romanticism. – U.S. Senator William Gibbs McAdoo

He chose not to print money, because it would hide the true cost of the war.

I’m quoting directly from the Federal Reserve History website, which is ironic, given that the Fed has aggressively printed money since the start of the CoronaCrisis. The Fed’s balance sheet now stands at $7 trillion, which hides the true cost of the Coronavirus.

McAdoo understood something about human psychology: When people pay for something, they’re more likely to believe in it.

Most economists are not great psychologists, but McAdoo was an exception. He financed World War I through a combination of raising taxes (#1) and borrowing from the public (#2), in the form of Liberty Bonds. In so doing, he avoided printing money (#3).

By printing money, we’ve already “forgotten” about the true cost of the Coronavirus. The problem is that there are likely a lot more costs to come: everything from restarting the economy to distributing a vaccine. And if we continue to print money, we run a danger of entering hyperinflation.

We can take a page from history, and launch a modern-day “Liberty Bond” ad campaign as a way to not only finance the CoronaCrisis, but to laser-focus public opinion on our need to defeat it.

We need to advertise the blockchain bond. 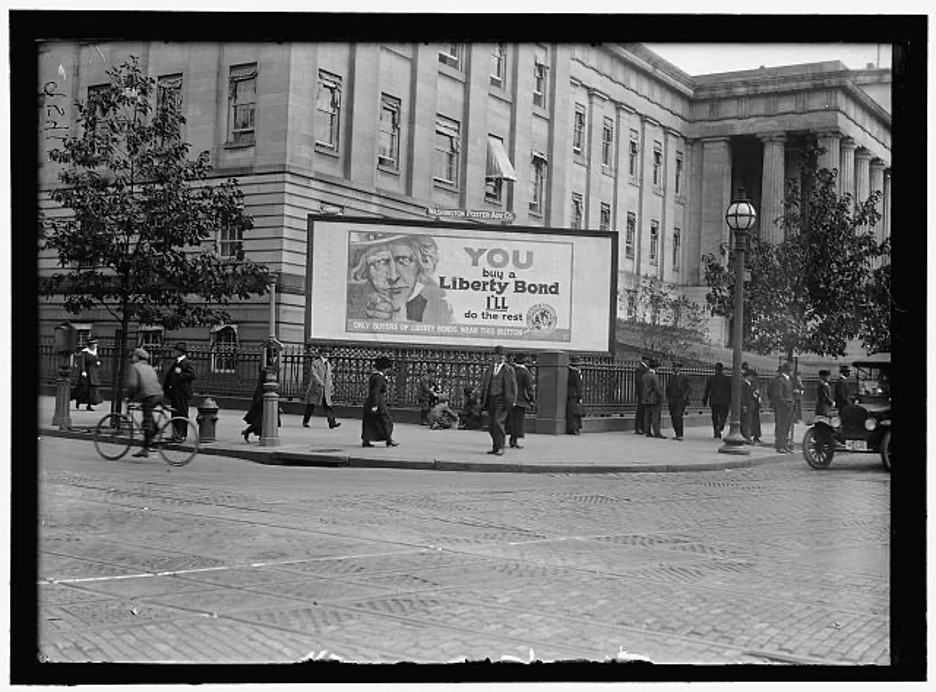 Everything Old is New Again

McAdoo (heh) insisted on a massive PR campaign to promote the bonds, so the public would have a chance to buy them, protecting himself from criticism that only large financial institutions would profit. In the end, about half the bonds were sold to retail investors (i.e., the public), raising about $16.7 billion.

In today’s money, that would be about $7 trillion. (Or roughly the size of the Fed’s balance sheet.)

The federal government launched a massive ad campaign with billboards, posters, buttons, and stickers. Much of the ad space was donated by patriotic media companies, with leading artists painting the advertisements and top Hollywood stars donating their time to the cause.

Most importantly, Liberty Bonds galvanized public sentiment toward the war. When the government prints money (as we’re doing today), it hides the true cost. When we personally make a sacrifice (by saving instead of spending), we all have skin in the game.

The Liberty Bond ad campaign told a great story: “we’re all in this together.” With the Coronavirus, we have no such story. In fact, it threatens to rip us apart.

Blockchain Bonds: How They Work and Why We Need Them

Last week, newsletter subscribers got the first peek at our new brochure Blockchain Bonds: How They Work and Why We Need Them. This week, you get a first look at the new ad campaign.

We’ve taken the classic Liberty Bond posters and updated them for the modern age. These posters can be used for states and governments who need to raise funds in a pinch (caveat: we still need to get the regulatory issues sorted out—but where there’s political will, there’s a way). 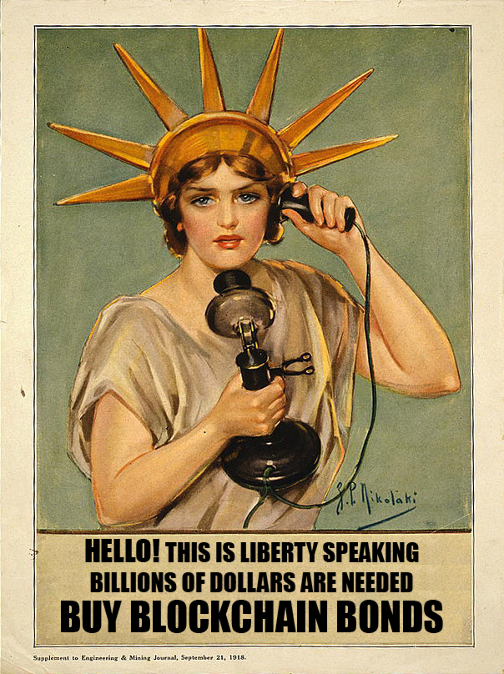 Governments will do well to spend about 8-10% of the total bond offering on advertising. This should be heavily tilted toward local citizens, to give them a “first chance” at a new blockchain bond offering.

The increased media spend will help local economies, especially when buying up unused ad space in local markets (think of all those local billboards and TV stations devastated by the pandemic). 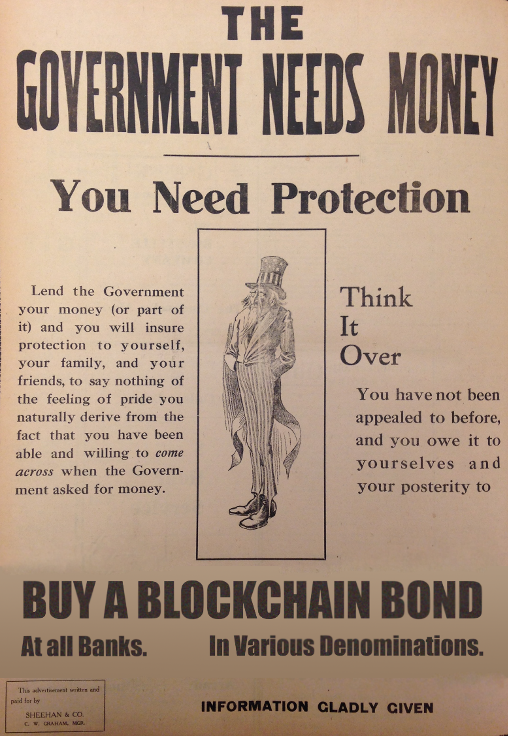 There is a risk. If done poorly, the bonds will not sell well, and this will hurt public morale. Like Liberty Bonds, it is preferable to sell them in a series of “brief but intense campaigns.” If at all possible, try to oversubscribe the offerings (i.e., make sure demand outweighs supply). You want them to sell out. 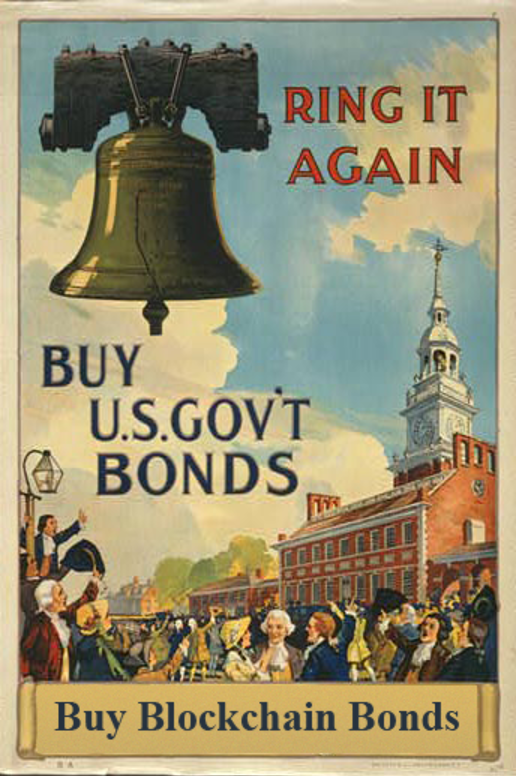 Governments should be transparent about how the funds raised by their blockchain bonds will be used (for example, supporting school systems or first responders). Appeal to the higher good.

Campaign images should focus on the higher virtues, such as bravery, persistence, integrity, citizenship, and hope. These are the great human themes that resonate throughout all great human movements.

If done well, blockchain bonds will become a movement. They will help us raise money to invest back into our governments, improving our local school systems and keeping our first responders in uniform.

If done well, blockchain bonds will help us see the true cost of Coronavirus, and unite us in our will to eradicate it (it ain’t over until V-Day).

If done well, blockchain bonds will galvanize public opinion: we’re all in this together.

Because we are all in this together. We literally are.

Fill out the info below to download our new ebook, Blockchain Bonds: How They Work and Why We Need Them.

Thanks for downloading! We hope you’ll share it with a friend.