There’s something wrong with the world today. I don’t know what it is.

Bitcoin, ether, and all three major U.S. stock indices are on the edge. With large thanks to clever financial engineering by the powers that be, high-risk assets are on a rocket ride to the moon. Mati Greenspan Click to tweet

For those willing to take even more risk, there are shares and tokens out there that have experienced hundreds or even thousands of percentage points in gains these last few weeks, including two projects I am advising personally.

Obviously though, with that level of risk, we do need to be cautious, but it seems in my mind silly for anyone with a bit of spare cash to not at least dabble in these markets.

That said, the Cantillon effect, which we researched nearly a year ago, explains how more money being printed will affect relative prices of different assets, well, differently.

So, even though all these risky assets are rising, it’s important to note that the correlation between bitcoin and the benchmark S&P 500 has been in steady decline over the last few months.

In this graph from Coin Metrics a reading below 0.3 can be seen as an insignificant correlation, meaning that it shows virtually no relation between the two assets and their price movements. 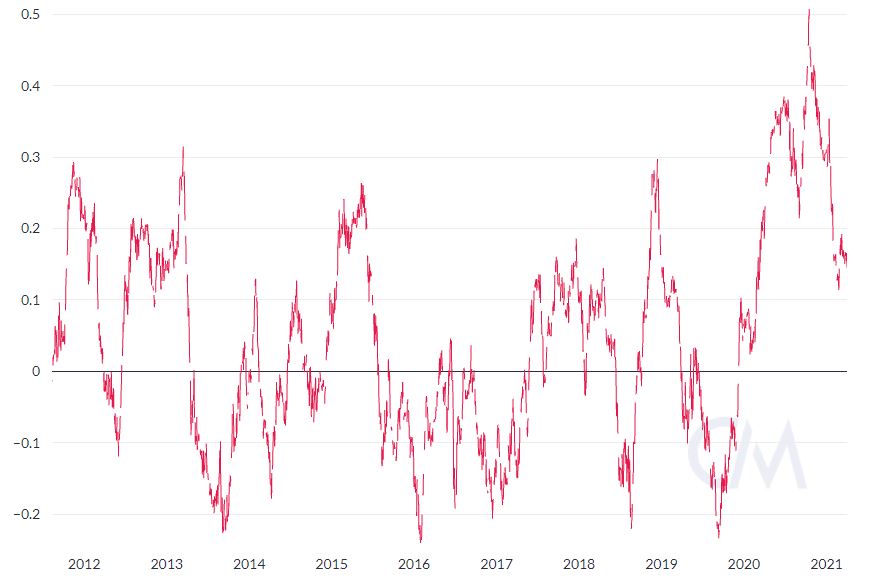 It is for this reason that J.P. Morgan issued this report stating that bitcoin’s correlation with traditional asset classes has been falling lately, meaning that the digital currency has been growing more useful as a means of achieving diversification.

In a world where anyone with the ability to work online has already had a big taste of the work-from-home lifestyle, it’s easy to see how the migration from physical reality to virtual spaces has just undergone a quantum leap.

People are much more comfortable conducting business and recreational activities online than ever before.

So, it only makes sense that people are using this time to think about the future and imagine what life might be like in the next few years, if only for the sole purpose of profiting from the ingenuity. That and the fact that there’s just so much money in the system right now that’s looking for a viable home.

So, in a way, this entire monetary experiment may be a blessing in disguise. Sure, we’re very likely to see astronomical inflation in the next few years.

However, the U.S. has seen high levels of inflation before and come out on top. As long as we keep innovating, we grow the pie.

In this light, it’s much easier to understand the recent prediction from Cathy Wood that Tesla will reach $3,000 per share by 2025. This certainly doesn’t come as a surprise.

For bitcoin, as we continue to bump against the massive psychological resistance of $60,000 per coin, the fear of inflation can be a powerful driver.

Michael Saylor did. He bought the dip again. It wasn’t only him. It seems one of the most powerful markets has awoken again.

South Korea, which ostensibly has been on the sidelines over the last few months, is now in a buying mood, as is evidenced by the Kimchi premium.

We saw this quite frequently in 2017, where the price of bitcoin on South Korean exchanges was higher than the price in most of the rest of the world due to demand.

The market has matured a lot since then, and we have seen extremely consistent pricing throughout the various exchanges, with very few exceptions. This particular premium returning is an extremely bullish sign.

For all those celebrating, we’d like to wish you a very happy Easter Monday.

Please note that there will be no BMJ Newsletter tomorrow, as I’ll be out of the office. We’ll continue as usual on Wednesday. Special thanks to Aerosmith for today’s lyrics and title.