Things have been so hectic in the markets lately, and it seems an apology is in order. We’re a week and a half into Q4 earnings season, and it has yet to come up in the these daily newsletters!!

For that, we’re sorry, but not really sorry. In normal times, we’d probably start drilling down on all the major stocks and see how their reports are affecting their respective industries, but lately there’s just been so many more exciting and pertinent things to talk about.

Of course, with the largest company in the world reporting after the closing bell tonight, it’s not exactly something we can ignore, even if GameStop trading volumes did overtake the market as the share price continues ever further into ridiculous territory.

At the time of this writing, the company stock, which had a fundamental value below $25, was trading at $360.

Alright, fine. One final rant on GameStop, and then I’m done. …

It just makes very little sense to me how anybody is pitching this as a rich vs. poor story. A quick Google search reveals the world’s top holders of GME. Spoiler alert, they are not huge Reddit enthusiasts. Mati Greenspan Click to tweet

These major investors include BlackRock, Vanguard, several large hedge funds and a billionaire named Donald Foss, who owns 5.3% of the company.

No doubt they’ve been selling into this ridiculous rally and getting returns far greater than what they deserve for the value they’ve created by holding onto the stock.

Meanwhile, noob traders, whether for fun or due to misguidance, are no doubt getting called out on the margins left and right. Melvin Capital and all the other large players have already covered their shorts, so all they are doing now is pumping BlackRock CEO Larry Fink’s bags.

Those who manage to execute the plan and HODL GameStop stock for the long run will no doubt be severely undercut when the company decides to issue more shares.

GME is not like BTC, the company can and should dilute it given the current market appetite. That’s how capitalism works.

So here are the top companies reporting earnings this week. … 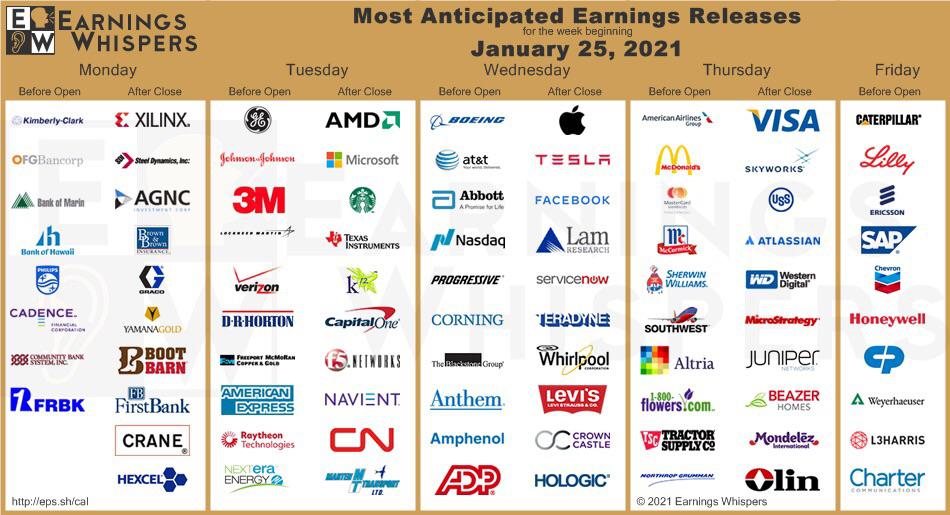 If you can’t read it from the picture, simply click the image to enlarge. If you’re not trading individual stocks, however, it may not be the best use of time.

For index traders, the stocks we want to watch are AMD and Microsoft, both of which performed superbly in the last quarter of last year. Tonight, we’ll have the pleasure of hearing from Facebook, Apple, and Tesla, as well as a few dozen other companies.

As none of these three headliners have been negatively affected by COVID-19, the current forecast from analysts is that they will smash all analyst estimates. Yes, I’m aware of the circular logic in the previous statement, but it’s not the most paradoxical element at play in today’s market.

Bitcoin dipped below $30,000 today for the first time since Friday. For those wondering where the most likely next stops on the price discovery journey might be, we can use the Fibonacci retracement tool, which has been a fairly solid indicator lately, at least as solid as any single technical indicator can be.

By drawing the line from $10,000 to $40,000, which are the key psychological levels of that last massive leg up, we can see that we’ve now neatly bounced off the second Fibonacci level, which is in the light green area on the graph. … 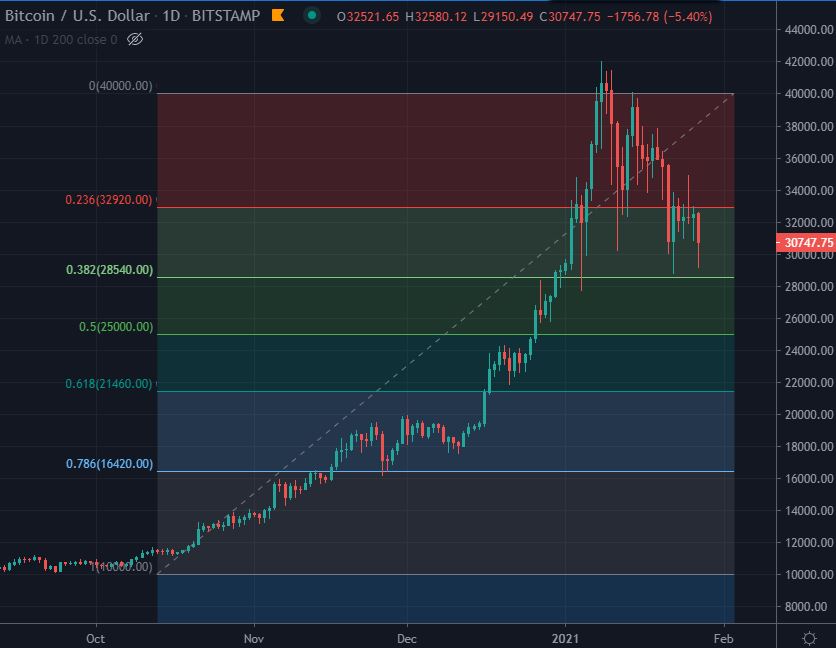 It’s a bit of a tricky spot to be in. On one hand, if we break below this level, the next most likely levels of support would be approximately $28,540 and $25,000. However, if we close our positions now, and the price rebounds, then we’re in real trouble, as we’d then be forced to buy in at even higher levels.

The best thing for now, it seems, is to HODL fast. It’s still not cheap enough for my taste to buy more, but either of the above mentioned targets very likely would be, especially if we get more bullish news like what we’ve been seeing lately.

A perfect example would be Fink’s comments to Bloomberg a few hours ago, which seem to indicate that he is not only extremely optimistic about Bitcoin, but that he might be looking into a few altcoins as well.

It’s with good reason too. The U.S. dollar is going through a rough patch right now, and only time will tell what takes place.