-Warren Buffett, the Oracle of Omaha

Five prominent members of the blockchain community attended a secret meeting with the oracle yesterday in an attempt to teach him about cryptoassets. Instead, it seems that they were the ones who ended up learning from him.

In this Tweet thread, Justin Sun, who arranged the meeting by virtue of a $4.5 million donation to charity, publicly thanked Warren for his support and advice on how to take Tron to the next level. Whatever he said, it must be working because Tron is up about 12% since the meeting.

Another person who dined with them is my former boss Yoni Assia. In fact, while I was working in eToro I actually suggested to Justin to take Yoni and it seems he liked the idea. Yoni also put out his own volley of tweets in which he states that he tried to teach Warren about bitcoin but instead Warren taught him about value investing.

Funny enough, another email hit my inbox this morning about value investing. It was a fascinating dissertation from one of my favorite authors, Bloomberg’s John Authors, who was comparing value stocks to growth stocks. Here’s a key graph from that analysis. 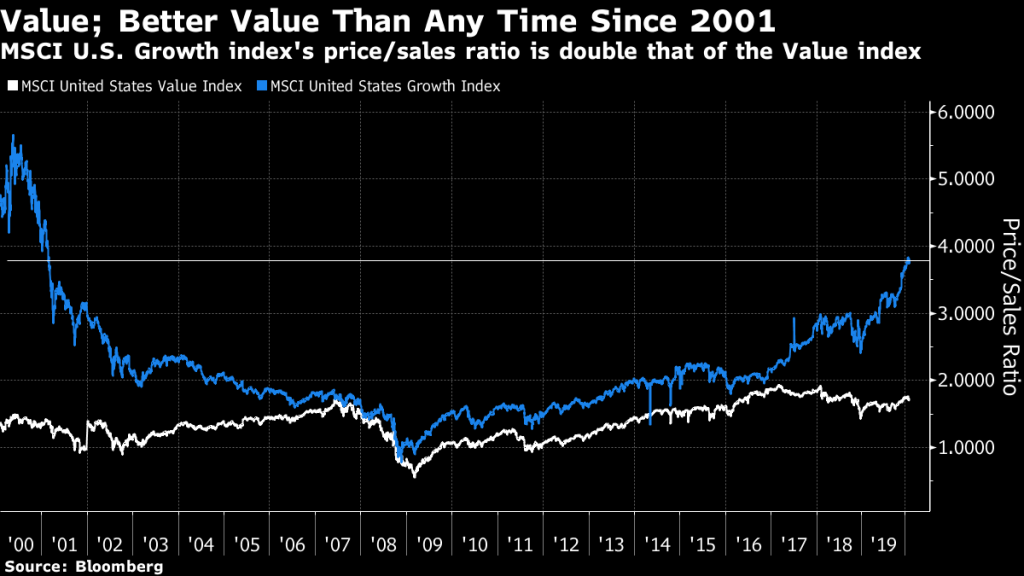 Authors seems to conclude that the divergence at the moment will likely be closed, but not necessarily because value will rise but perhaps growth will fall.

Given the current situation with central banks, I find it hard to believe that there are really any large cap stocks right now that are a real value. There are certainly some that are relatively cheap but pretty much all stocks are expensive at the moment.

Buffett made his billions in a world that doesn’t exist anymore. Whoever the oracle of the next generation will be, my feeling is that they’ll have a much keener understanding of emerging technology and will be less reliant on baseless fiat money. Mati Greenspan Click to tweet

Hooray!! It’s NFP day! and you know what that means… big market moves are expected.

When the US Bored of Labor Statistics releases their data today, analysts are forecasting that more than 160,000 jobs have been added to the economy in the month of January and that average earnings have ticked up by 0.3% since last month.

What’s different about today than most NFP days is that US elections are coming soon. So rather than focusing on how the data might be interpreted by the Fed or how it might impact policy going forward, investors will more likely focus on how the data will affect the candidates and how they might use it to persuade voters.

A strong number would no doubt be touted from the President’s pulpit to drum up support. A weak number might be useful for Buttigiege for example but no doubt Sanders has other numbers to battle Trump with.

Of course, if the numbers surprise to the downside or if earnings were to suddenly spike, focus will be back on the Fed in a flash.

What seems to be farthest from investors minds at the moment is the Coronavirus, which is still very much considered a ‘Chinese problem’ and not something that might impact the markets.

The price is less than $300 away, it could happen today!!

Although, I should be careful saying that. This very price prediction got me in a bit of trouble last night when I had to livestream myself eating two hotdogs and a mushroom for eager fans. Well, they were more pepperoni sticks but it was all I could find on such short notice. The live streaming was kindof fun though and I think I’ll do more stuff on Periscope going forward as there were a ton of great questions about the markets.

It’s been many years since I actually tried to publicly predict what the markets were gonna do and when they were gonna do it and I’m not really sure what inspired me to do it this time. But, I was wrong. I learned my lesson and paid the price. Feel free to watch me embarrass myself at this link. 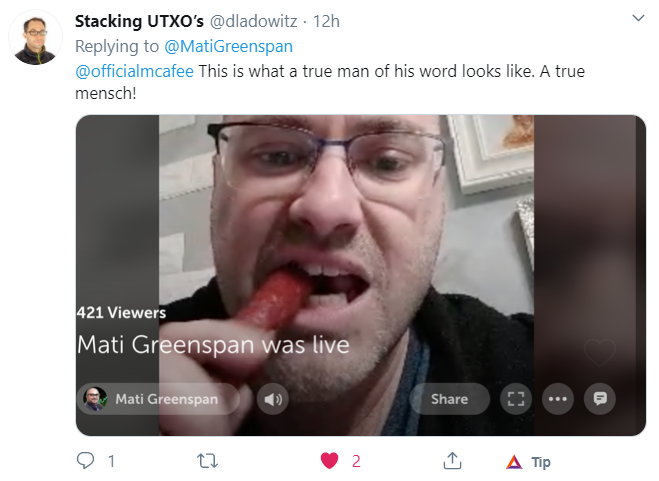 In any case, as we explained in the video it’s probably better that bitcoin’s rise remain gradual. Price stability is certainly optimal for the growth of the network.