Normally it would be around this time that analysts, including myself, would be frantically writing simple guides on “how to trade the elections,” but in many ways this particular election is truly unique.

The crux of the issue here is that most people seem to be unsure of just how long it will take to obtain the results. As we’ve previously mentioned in the BMJ Newsletter, this election has a much larger chance of having a disputed result than most elections.

To recap how it works: Usually, everyone goes to vote on Nov. 3, then once the polls are closed, stations start frantically counting votes.

Then, sometime in the middle of the night, the media declares a winner based on current vote counts and probabilities. For example, California and New York are usually colored blue within moments of the polls closing, simply because there’s very little chance that the Republicans can win in those states.

However, despite the massive levels of uncertainty in both the markets and the media, I’m quite sure there isn’t much to worry about here.

Over 90 million people are reported to have already voted, which is about two-thirds of the usual turnout in the United States, meaning that election officials will only need to count the remainder of ballots on election night.

Yes, it’s true that some states have previously indicated that it may take several days after the election to get a final count. My guess is that they weren’t counting on such a high level of early voting.

It’s true that the early ballots, for the most part, cannot be counted until the polls close, but it’s not like the states will be sitting there waiting for votes to drip in. It’s more likely that they will be more comfortable to declare a winner after the bulk has been counted.

So yes, the result may be delayed, but my best guess is that the day will be measured in hours, maybe days, and not weeks and months as some expect.

The stock markets are doing a bit better today though, especially in Europe, where monetary and fiscal stimulus seem much more tangible.

What caught my attention is the extreme divergence within the markets. Usually we’d see crude oil rallying along with the other risk assets, but today has been far less enthusiastic for oil.

Perhaps this a gentle reminder that the virus is still with us, and demand for travel is nowhere near recovered despite much of the world’s population already being out of lockdown. Or, perhaps it’s a sign that crude oil is going out of style.

Speaking of divergences, it seems impossible to ignore the one that exists between bitcoin and the stock market right now.

From Bitcoin’s inception until earlier this year, cryptocurrencies were seen by those familiar with them as a rising asset class and uncorrelated with other markets.

However, the multi-asset sell-off in Mid-March that marked the beginning of global awareness to the virus has brought about a new perception, that in a pinch, bitcoin may in fact react in-line with other markets.

So, as analysts like to do, we went deep into just how much the two are actually correlated and what this actually means.

No doubt this has had some influence on the price and has become somewhat of a self-fulfilling prophecy to the point that for a while there, bitcoin traders would be glued to the stock market performance and take their cues from it, and vice versa.

Just looking at the action over the last few weeks, it’s quite clear that this may no longer be the case, at least if we overanalyze a few specific days when bitcoin buying occurred.

Especially on Oct, 21, when bitcoin blasted through $12,000, and a week later on Oct. 27, when bitcoin first tested $14,000, we can see that the corresponding movements from the stock market were anything but reciprocal. 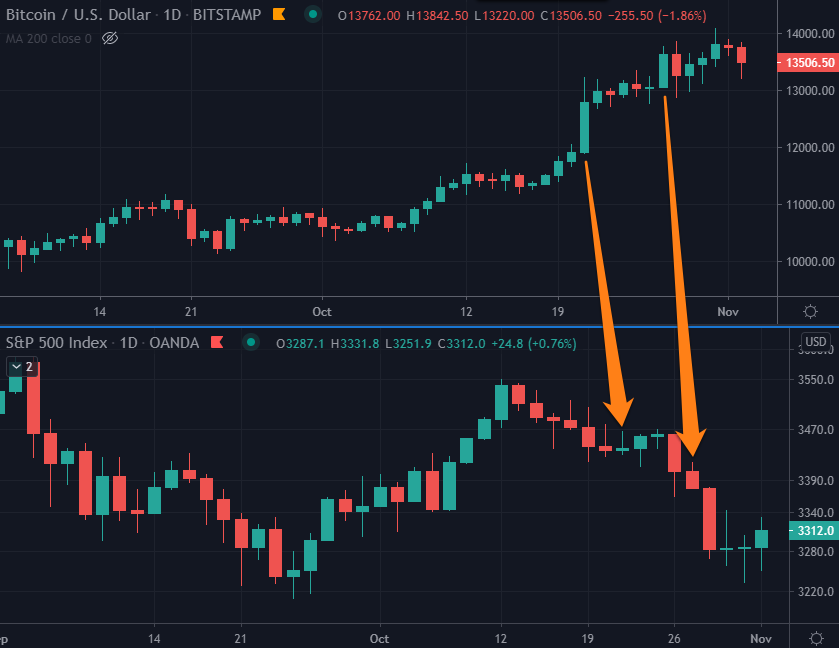 Of course, if we zoom out from the start of the pandemic and measure from the depths of despair until today, we can see that the direction is the same, but the actual percentage performance is vastly different.

Incidentally, this is the same dynamic that bitcoin has always enjoyed with the stock market. They have the same long-term direction, but a vastly different speed of travel.

So, is bitcoin slowly returning to its old comfort zone of being completely non-correlated, or is it gradually transitioning to be more of a safe haven in the face of incredible risk? Or, are we just overanalyzing this whole thing?

Just like the elections, it would be impossible to extrapolate the outcome given the current data.

However, if we ignore the politics and the minutiae, it’s clear to see what’s already happening on the ground and who the clear benefactors are.