“Sell in May and go away, then come back on St. Leger’s Day.” Mati Greenspan Click to tweet

An old English trader’s saying, it refers to the practice of leaving London during the summer to ride out the hot months in the countryside. Then, it involves coming back for a giant horse race that was apparently held in mid-September.

The invention of the air conditioner in 1902 means that now aristocrats can be a bit less seasonal with their investment/gambling habits and over the last decade, the market has fallen in May exactly three times, two of which showed only miner losses. Yet, somehow every year on May Day (1st of May (today)) several analysts, myself being guilty as well, write articles with the title “Sell in May” followed by a big question mark.

Well, this year all those question marks have been replaced by a giant exclamation point.

The U.S. stock market put up its best performance since 1987, which is pretty unbelievable considering that the unemployment rate, over the last two month, has swung from record lows to record highs.

Apple’s losses reported yesterday were quite expected, but what really caught investors off-guard is…

In short, they had a great quarter, but it seems they’re reinvesting a lot of the money into their employees, PPE, safety, and infrastructure. In the words of Jeff Bezos:

Frankly, I’m not sure what investors are bellyaching about. It should probably be seen as a good thing that Amazon is moving to protect one of the only remaining parts of the fragile supply chain that’s still functional. It also shouldn’t come as too much of a surprise. It’s quite characteristic of Amazon to reinvest profits whenever they can, which is how they grew so fast to begin with.

The drop in AMZN shares is perhaps not too brutal. It’s only come down slightly from the all time high in overnight trading, but it does seem to have put the market into a bit of a mood. 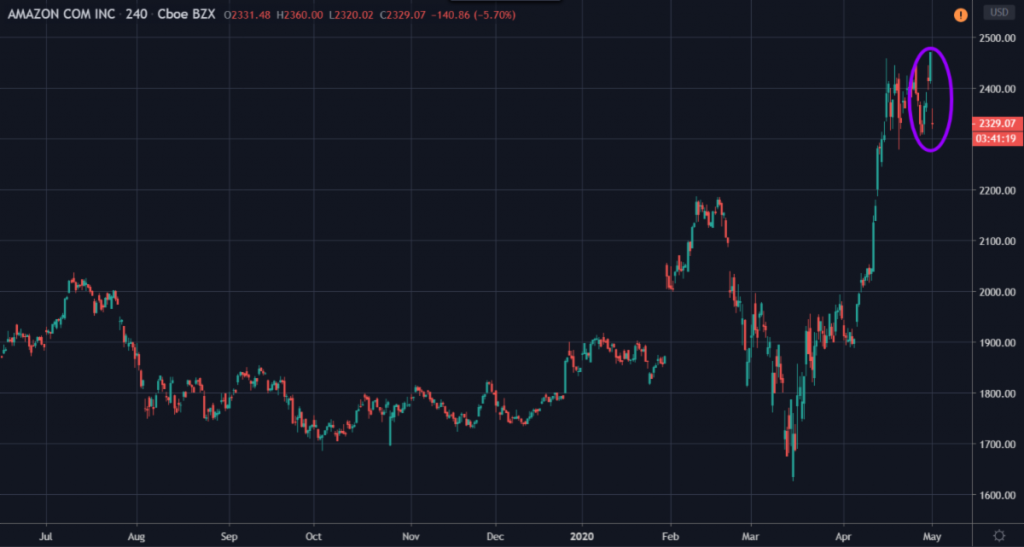 As well, I’d also mention that the ECB’s failure to woo investors with their new program is not a positive sign at all.

Still, past performance is not an indication of future results. Fighting the Fed has proven deadly for many a brave investor over the last few decades, so it’s difficult to say with any degree of certainty which way we’ll go from here.

But does ‘sell in May’ apply to bitcoin?

When I posted the adage on Twitter last night, I guess it was inevitable that many followers thought I was talking about BTC. Suppose it goes to show the association people make about my analysis. But… as we’ve been repeating lately, the price action between bitcoin and the stock markets has been quite correlated post COVID-19.

So if stocks are going down, it kind of makes sense that bitcoin might do the same. Doesn’t it?

Well, maybe not. Over the last 48 hours or so, we’ve seen a few rather encouraging moments of decoupling. In this graph we can see bitcoin in orange and the S&P 500 index in blue. Notice that throughout the month of April they’ve been almost identical, save only for a classic bitcoin Bart pattern that took the price up at the beginning of the month and back down on the 13th. Of course, the action from the 29th onward doesn’t need any special narration. 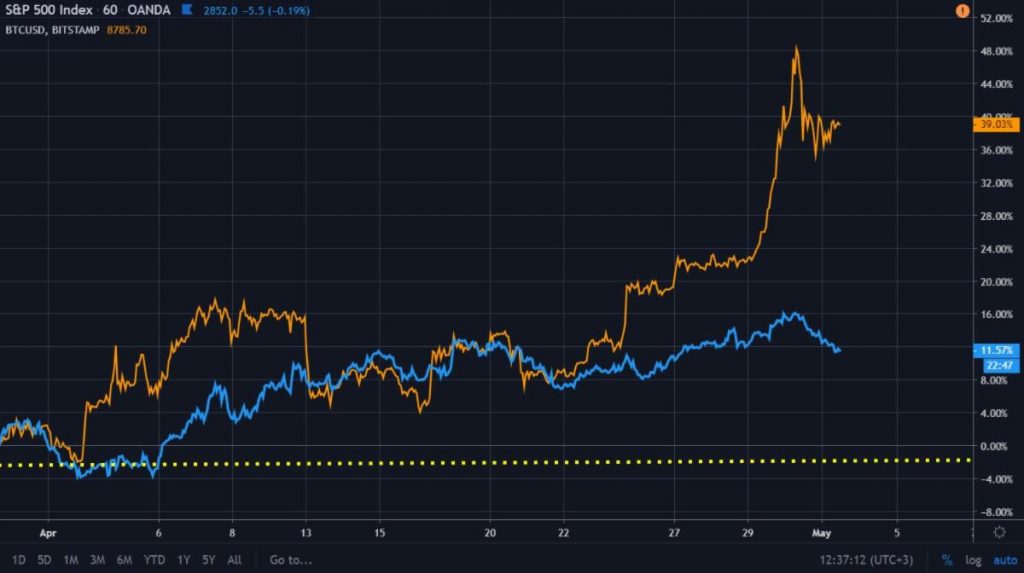 Still, correlations rely on long term data so trying to draw any real conclusions from this chart alone would be pretty foolish. What does give me pause about short term bullishness though is the wider downward facing channel that’s formed in bitcoin over the last year. A channel that must be broached at this time and must be breached in order to make any real bullish calls. 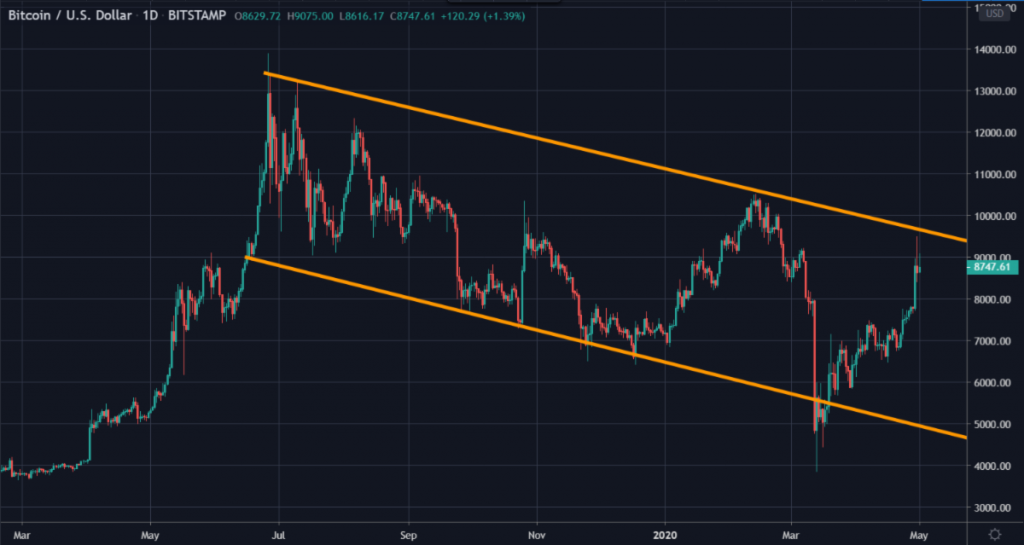