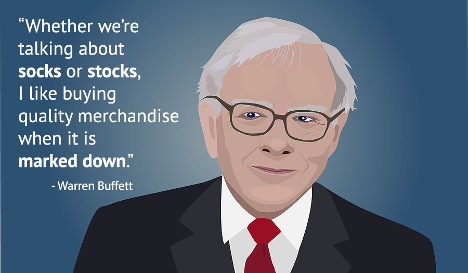 Quick summary: Ethereum (ETH), the #2 cryptocurrency, is far more useful than bitcoin, because it’s being used to build the next generation of financial applications. Think of blockchains like businesses, measuring their number of users (which are like customers) to find the Value Per User. Using VPU, Ethereum is undervalued relative to other digital assets.

One of the principles of value investing – the style of investing favored by Warren Buffett and Charlie Munger – is to find “stocks on sale.” In other words, you find stocks that are trading at less than their true value. You look for deals.

In value investing, you use certain financial metrics to evaluate the health of a company, to determine whether its stock price might be a bargain. Most of those metrics just don’t apply to blockchains.

In my How to Invest in DeFi series, I described how blockchains are much more transparent than public companies, because we can see everything happening in real time: we don’t have to wait for earnings reports, press releases, or corporate spin. The numbers are the numbers.

Of these numbers, the number of users is the most important metric, because blockchains have network effects. (Refresh yourself on the Rocket Ship Rule.) In addition to number of users, we can also look at the number of power users, which are users actively engaged in online communities like Discord.

We add up these users and power users, then divide them by the total market cap to get a Value Per User (VPU).

In the charts above, I’ve pulled these numbers for many of the top DeFi projects, then compared them with Ethereum. The takeaway is that on a Value Per User (VPU) basis, Ethereum is currently a better deal than any DeFi project.

This is quite remarkable.

Unlike bitcoin, which is not good for much of anything in the real world, Ethereum is the platform of choice for blockchain developers. It’s where the next generation of financial services are being built. So we would expect Ethereum to be much, much higher on a Value Per User basis than any DeFi project.

Instead, on a Value Per User basis, Ethereum is cheapest of all.

It could be that it’s all crazy overvalued. As I’ve written in previous columns, publicly-traded social media companies are much lower on a VPU basis: traditional investors value Facebook stock at about $150 per user, and Twitter at around $75 per user. Could Ethereum really be worth 10 times that?

Well, yes. Any fool can start a Twitter account, while opening an Ethereum wallet requires a certain amount of technical proficiency. You also have to want to move value around—as opposed to Twitter, where you want to post things that no one will read. So Ethereum users are more valuable.

But when we look at the Value Per User for some of these other DeFi protocols, it gets hard to believe that an individual user could really be worth $50,000 or more.

Here’s a useful analogy: think of blockchains like businesses.

In a traditional business, you have customers. In the marketing world, we often talk about the “Cost to Acquire a Customer,” which is abbreviated CAC. (Also the noise you make when you get the bill from your marketing agency.)

Let’s say you have an online shop that sells custom socks. Your average customer orders 2 pairs of socks, and comes back later for another 2 pairs. Your average pair of socks costs $25, so the “Customer Lifetime Value” is $100 (4 pairs of socks at $25 a pair). To keep it simple, let’s just say a new customer is worth $100.

What would you pay to acquire that new customer?

Of course, in a real business we have to look at what it costs us to produce the socks, the operating costs of our sock sweatshop, etc. – but certainly we wouldn’t pay more than $100 to acquire a customer that’s worth $100.

This CAC (gesundheit) is useful for deciding where to spend your marketing money to acquire new customers. For example, you wouldn’t want to buy search advertising if Google is charging you $2 per click, and only 1 in 100 ad clickers end up buying socks ($2 / 1% = $200 CAC).

Now imagine you own an entirely different business. Let’s say you make the e-commerce software that powers the online sock stores. New users pay $1,000 per month, and (because it’s such a hassle to switch e-commerce platforms) they stay for an average of 3 years. Your CAC is $36,000.

Because these are more valuable customers, it’s reflected in Google’s ad prices: now your cost to advertise on Google is $20 per click (ecommerce software is a better business than ecommerce itself)! But if 1 in 100 ad clickers end up buying your ecommerce platform, you’ll pay Google all day long. ($20 / 1% = $2000 CAC, to acquire a $36,000 customer).

This is why the cost to advertise on some Google keywords (like “e-commerce software”) is so expensive, while the cost on others (like “custom socks”) is so cheap. They’re totally different customers, and one type of customer is easily 10x as valuable as the other.

Now, let’s apply this to blockchains.

When you buy a blockchain investment, it is like you are investing in the underlying business. To be clear, you’re not buying a business — there’s often not even a company involved — but the idea is similar. Instead of customers, you have users. And those users have real value, both now and in the future.

This is not how most people invest in blockchain! They go with the crowd, jump on what’s hot, follow the fools on Twitter. They look at historical prices, and try to guess where it’s going next. If the price is going up, they jump on the bandwagon—and when the price is going down, they sell to “lock in their losses.”

What I’m encouraging you to think about is the fundamental value of a blockchain project. (Value investing.) And a very good measure of its value is users, especially when those users are active and engaged. They’re like the loyal customers of a company.

Now think about what you’d pay to acquire those new customers, if you were running the blockchain “business.” If you were the CEO of Ethereum (no such thing), would you pay $1000 per new user? One could make the case that each new user of Ethereum is going to bring in more than $1000 in long-term value, because of network effects.

But if you were running the DeFi protocol REN, could you really make the case that each new user is going to bring in $69,000 in long-term value? If we’re paying $1,000 per user on Ethereum, then paying $69,000 per user for an Ethereum-based project seems like a stretch (to put it mildly).

Think of it this way: would REN pay $69,000 to get a new customer? (If so, they’re not spending enough on marketing.)

The takeaway for me is that the best way to invest in the new DeFi ecosystem is to simply buy and hold Ethereum. Even at its current price.

Like a rising teenage pop star, the blockchain industry is still young and immature, so don’t invest more than you’re willing to lose 100%. Think about blockchain investing as part of a balanced diet. And invest for the long term, because the only thing constant about crypto is change.

Most of all, look at the underlying value of these blockchain investments. As the legendary Ben Graham (the father of value investing) said, “Price is what you pay. Value is what you get.”

When the value far exceeds the price (like our newsletter), that’s a good investment.