2017 is a year that will live in infamy for many crypto traders—when the price of bitcoin skyrocketed in the last quarter, bringing with it a flood of new-age alternative traders and a brand new asset class. That is up until the peak on December 18, when the bubble finally burst.

The ensuing period became known as altseason, when traders took their profits out of the fast-falling bitcoin and shoved them into other, newer cryptocurrencies. This went on for several weeks until it became quite clear to everyone that the party was over and the great crypto winter set in. Or so some would have you believe….

Sure, the selling of BTC at her peak most likely helped fuel a trove of new tiny-cap coins, just as a lot of air flowing into a tiny balloon will see its size multiply exponentially. However, the narrative that crypto bull markets can always be neatly filed into two categories of altseason and bitcoin season really needs to be challenged. It’s about time that the phrase “wen altseason” dies a terrible death, and it seems that this is a perfect time of year for that.

Today is really the proof that’s in the pudding for myself as far as this theory goes. We can see a select few crypto assets, such as Cardano, Dot, and Chiliz popping at the moment, but the rest of the market is quite red over the last 24 hours.

Ripple’s XRP tokens have been having a terrible time over the last week ever since the U.S. Securities and Exchange Commission debacle. Mati Greenspan Click to tweet

This event that has scattered the entire market in very strange ways. Some tokens are falling in line with XRP. One example is Stellar Lumens (XLM), even though XLP coins are no apparent danger of a regulatory crackdown.

On the right side of this graph, we can clearly see the market’s response to the SEC’s actions on December 22, across the crypto space. 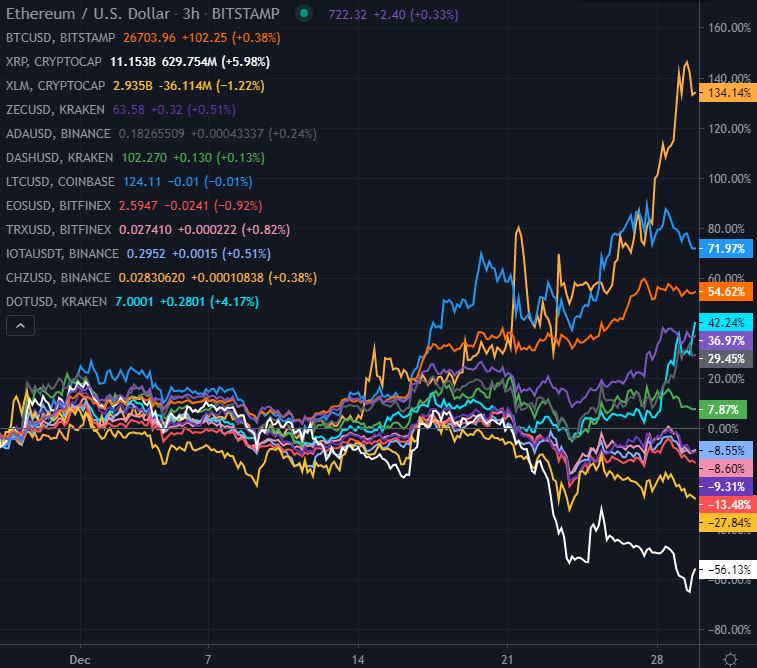 The market is an amazing mechanism, with the ability to price in new risks, even though they’re really just old risks that have now resurfaced.

Just because some coins are pumping and some are dumping doesn’t necessarily imply that we’re going through some sort of phase, and certainly doesn’t give us any clue as to what we might expect from the future. Past performance does not indicate future results, and correlation does not equal causation.

In fact, the chart below, from December 18, 2017 through January, shows a somewhat similar chaotic pattern where some coins were going up, and others were dropping. 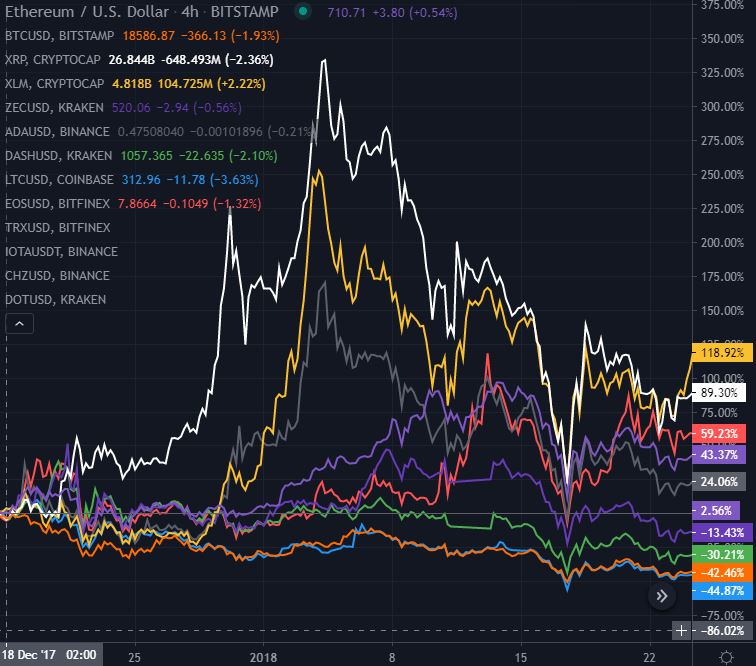 Altseason is a Myth

The term above is no more than outdated terminology that refuses to die. In general, the term altcoin has meant any crypto besides bitcoin. China’s digital currency, the DCEP, is already in live deployment and is being tested by everyday merchants and consumers. Not sure we could classify this as an altcoin.

If we look at both graphs above, there seem to be more than two different categories. To me, it makes more sense to analyze the market as a dynamic multi-class system, rather than altseason and not altseason. Check the second graph; it wasn’t just bitcoin that was beaten up; it was all the money coins, with Litecoin, Dash, and Zcash underperforming, and the bank coins XRP and XLM delivering the big gains. Then in the middle, you have all the smart contract platforms.

Two of the coins that are in the first graph aren’t even in the second simply because they weren’t around back then. Though it isn’t much fun to chart them both, as stablecoins and CBDCs are in a world of their own. NFTs are only just getting started and various governance tokens don’t really have a place with any of the above.

When it comes to programmable money, there are as many categories as there are coins. Bitcoin’s under or over-performance during any given period is a gross oversimplification of terminology, at best. At worst, it’s an attempt to cherry-pick data off the charts to pawn on the noobs.