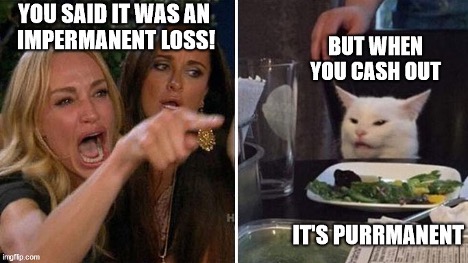 The blockchain industry is really bad at naming things.

Take the word “crypto,” for example, which sounds like someone who gets excited hanging around in cemeteries. “Sharding” sounds like something you’d do in your underwear.

Usually I think, well, these blockchain guys are math and science geeks. They’re not good with words.

But today we have a concept that’s not only named poorly, it’s downright deceptive. They call it “impermanent loss,” but it should really be called “permanent loss.”

I will explain what it is, using a funny story that you will remember. Then I’ll show you one simple rule to avoid getting taken in by this con artist term.

Years ago, my wife and I went on holiday to Thailand. We were riding around Bangkok in a tuk-tuk, seeing the sights, when the driver pulled over, complaining of engine trouble. Not long after we stopped the vehicle, a friendly gentleman came over and offered to help.

We struck up a conversation. He asked if we were tourists, and we said yes. He mentioned some of the local attractions that were already on our list, and offered some popular local places to eat. Thai people are genuinely friendly, and his love for the city was infectious.

“Of course you’ve checked out the markets,” he went on. “Be sure to hit the Night Market. Some good deals there. Also the Flower Market. The fragrance is unbelievable.” We pulled out our copy of Lonely Planet and looked them up as he was talking.

“Maybe you could write that down for our driver?” I asked.

“Sure.” He scribbled the address on a piece of paper, then handed it to our driver, who had fixed the problem with the tuk-tuk.

“You will love it!” he said as he waved goodbye. “This ring!” He pointed to a large sapphire on his finger. “I bought it there!”

“What a nice man,” I thought to myself.

When we got to the jewelry shop, we found it was really a showroom. We were warmly greeted by an associate, who took us into a small movie theater where we saw a short documentary on where the diamonds were mined, as well as how the gems were cut and polished. They served snacks.

Then we were helped by a well-dressed Thai gentleman who eventually helped us select and purchase a lovely sapphire necklace for my wife. We paid for our purchase in Thai baht – the local currency – and hailed another tuk-tuk to take us back to the hotel.

“Well, that really worked out,” I remarked on the ride back. “How lucky that we happened to run into that guy!”

I opened my copy of the Lonely Planet guidebook to look for a dinner place, only to see a warning I had not noticed before, in the section under “Gems & Jewellery”:

“Oh, boy.” I showed the guidebook to Jade.

“But…” Jade replayed the chain of events. “But the driver had a problem with the tuk-tuk…”

“Unless there was no problem with the tuk-tuk.” I pieced it together. “The driver pretends there’s a problem, pulls over where the sales guy can make his pitch, and they split the commission.”

Please know that Jade and I had lived in Boston for many years at this point, so we weren’t yokels just off the onion truck. But the gentleman was so friendly, so charming, so well-spoken, that we bought it … literally.

“I guess we try to get our money back.”

We returned to the hotel and spent the next day – literally, a full day of our vacation – trying to undo the damage. The jewelry store had a no-refund policy. We called the credit card company, but they said if we had received goods, they couldn’t issue a chargeback.

Finally, we went to the Bangkok police station, where we were referred to a department called Tourist Police. We explained our situation to the detective on duty, describing the hustler who fooled us. “Oh yes, I know exactly who that is,” the detective responded. “He works for the store.”

“Is it real jewelry, or fake?”

“It is not very good quality,” he responded. “We will call him in.”

The next day, we got a call to head back to the Tourist Police, where they had the con artist. He no longer looked so friendly. Now he was just really unhappy as the detective asked him to give us our money back.

While the detective watched, he called the shop and asked them to reverse our credit card charge. We gave him back the necklace, and we all went our own ways, Jade and I thanking the detective profusely as we left.

The happy ending to the story didn’t come until a month later, when we were back home in the United States and I was reviewing charges from the trip. I realized that in the time between when we purchased the necklace and then reversed the purchase, the value of the Thai baht had fallen against the dollar.

This meant we actually made money on the transaction.

We were refunded the same amount of Thai baht, but they were now worth more in USD, so we made money. I literally laughed out loud. “Ha ha!” I shouted at the Thai huckster, now 8,500 miles away. “Crime does not pay!”

I tell you this story as an imperfect analogy of “impermanent loss,” which again, should be called “permanent loss.”

When he refunded our purchase, the con artist suffered a loss due to currency fluctuations. He not only lost his comish, he lost money on the trade.

When you supply money to a liquidity pool on an Automated Market Maker, you lose money when the price of the two currencies changes — no matter whether the price goes up or down.

I’m a fan of Automated Market Maker services like Uniswap, because they greatly simplify the process of exchanging tokens. Let’s say you want to change ETH to DAI: you just go to Uniswap, hook up your Metamask wallet, and make the trade. No KYC process, no sign in.

If you try to make the same trade through Coinbase, you have to first upload your photo ID twelve times, because they can never quite verify that it’s you, even though you’re smiling while holding up your driver’s license right next to your face.

Also, Coinbase only trades certain tokens, but Uniswap pretty much trades them all.

In a typical liquidity pool, then, you are putting up your own crypto in return for earning the “service fee” on the other side. But again, you lose money when the price of this crypto goes up or down – just like our Thai salesman lost money when the currency fluctuated.

The industry has given it the deceptive name of “impermanent losses” because the losses are only theoretical until you cash out your “loan” (i.e., withdraw your liquidity pool), at which time they become very much permanent losses.

Why on earth would anyone join a liquidity pool? Because they earn money on each trade. So if you’re losing 5% on cryptocurrency fluctuations but you’re earning 10% in commissions, it’s still a good deal. But you can see this requires quantum-level math, not to mention hypervigilance.

But you will generally make more money buying and holding than becoming a liquidity provider. This is the key takeaway.

I am taking us down this weird rabbit hole because it is a huge temptation to join a lot of these projects as a “liquidity provider.” It seems like easy money: you just loan out your money, and receive commissions all day long. Passive income!

My blockchain investing strategy is a simple “buy great projects and hold for the long term,” not “try to constantly arbitrage discrepancies in trading pairs.” I’m glad there are people who can do this, because they make markets work. They make services like Uniswap work.

But they’re not for most blockchain investors. Don’t be fooled by the promise of easy money. There’s nothing easy about being a liquidity provider.

John Hargrave is the author of Blockchain for Everyone: How I Learned the Secrets of the New Millionaire Class, the bible of blockchain investing.