On the first year anniversary, the game is back but somehow it’s a lot more fast paced this time around.

Some of you may recall a year ago, in the depths of crypto winter a torch was passed among various members in the blockchain community. The game is simple. It was invented by @hodlonaut on Twitter who sent a transaction of 100,000 satoshis through the lightning network. The person who received the transaction then adds 10,000 sats and sends it on to the next player. And so on and so forth.

By the time I received the torch last time around it had already passed through the hands of Jack Dorsey, Andreas Antonopolous, Jameson Lopp, Pomp, the Magical Crypto Friends, and was only one hop away from it’s final destination. I did try to give the torch back to Hodlonaut through a friend of his in Norway but in the end the friend ended up passing it to someone else instead. I personally learned a lot about trust that day.

This time around however, the participants seem to be a lot less patient and it’s more about speed than stature. It’s not about who holds it but how fast it moves. 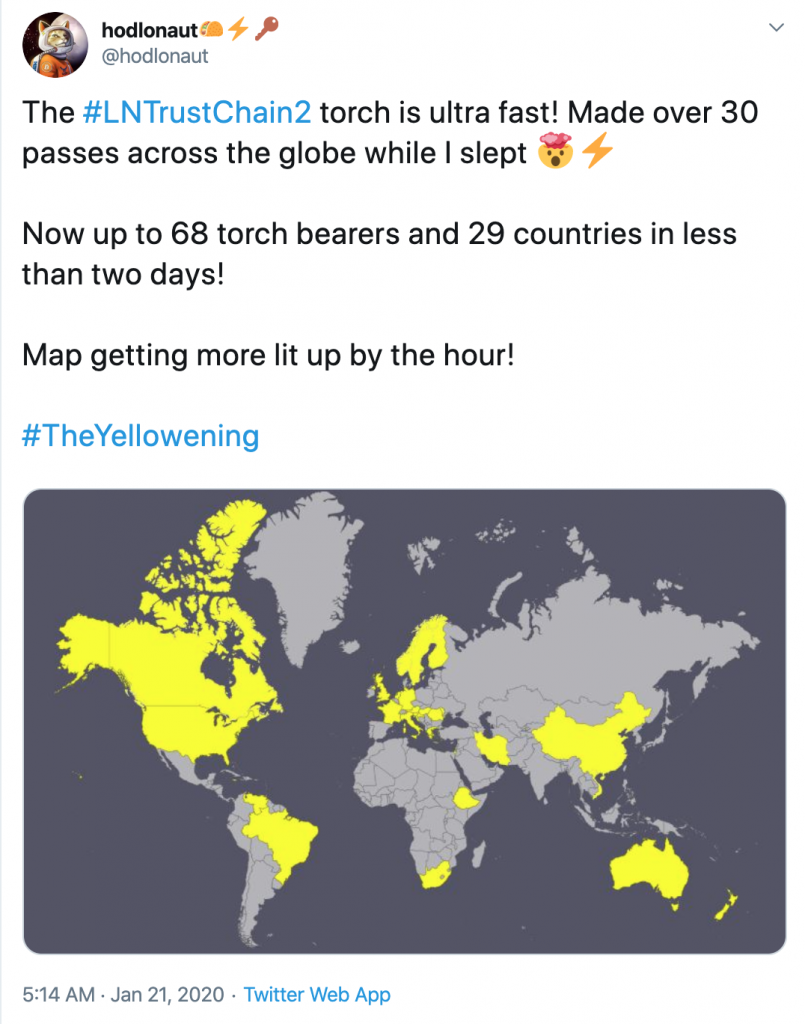 At the time of writing, the torch is now in Japan and the total amount of the pot after 96 hops is up to 0.0106 BTC (almost $100). It will be interesting to see how big the pot gets and where it will end up this time around.

Want to Grab it? Here’s How!

It’s not that difficult really. Just a matter of luck a persistence. While some choose to setup their own lightning node, this is certainly not necessary. I used the Blue Wallet app, which is available on Android and iPhone. Once the app is downloaded you’ll need to fund it by sending a bit of BTC ($2 worth should be more than enough) to the app and then using that to fill your lightning wallet. 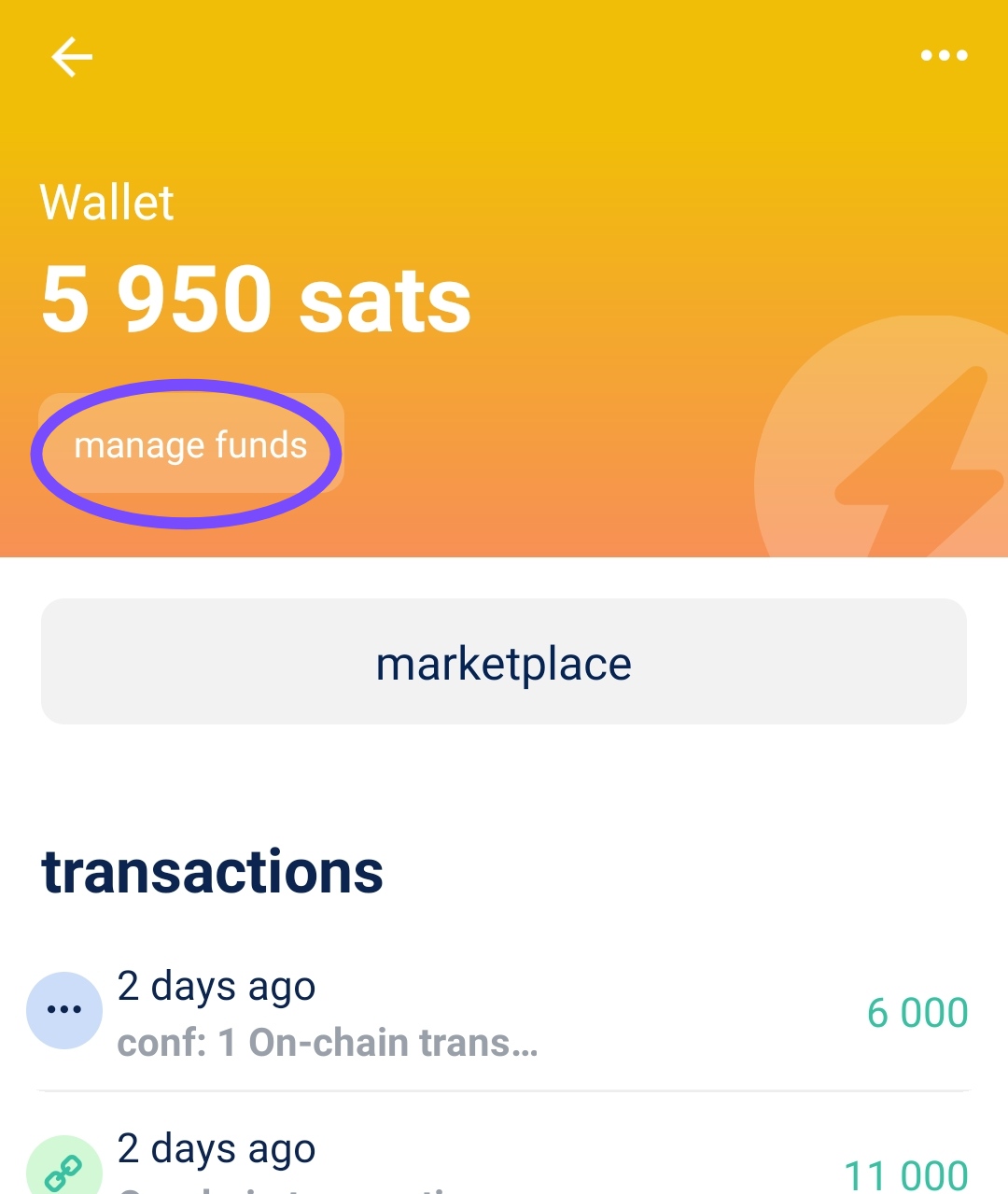 Then, you’ll need to track down the torch on Twitter. The easiest way is to simply search for the hashtag #LNtrustchain2, then see a post from someone saying that they have the torch. You’ll then want to check their page to see if they haven’t passed it on already. If they have, then follow it to the next hop and so on until you find the current bearer.

In their announcement, they should say how much the pot is up to. For example… 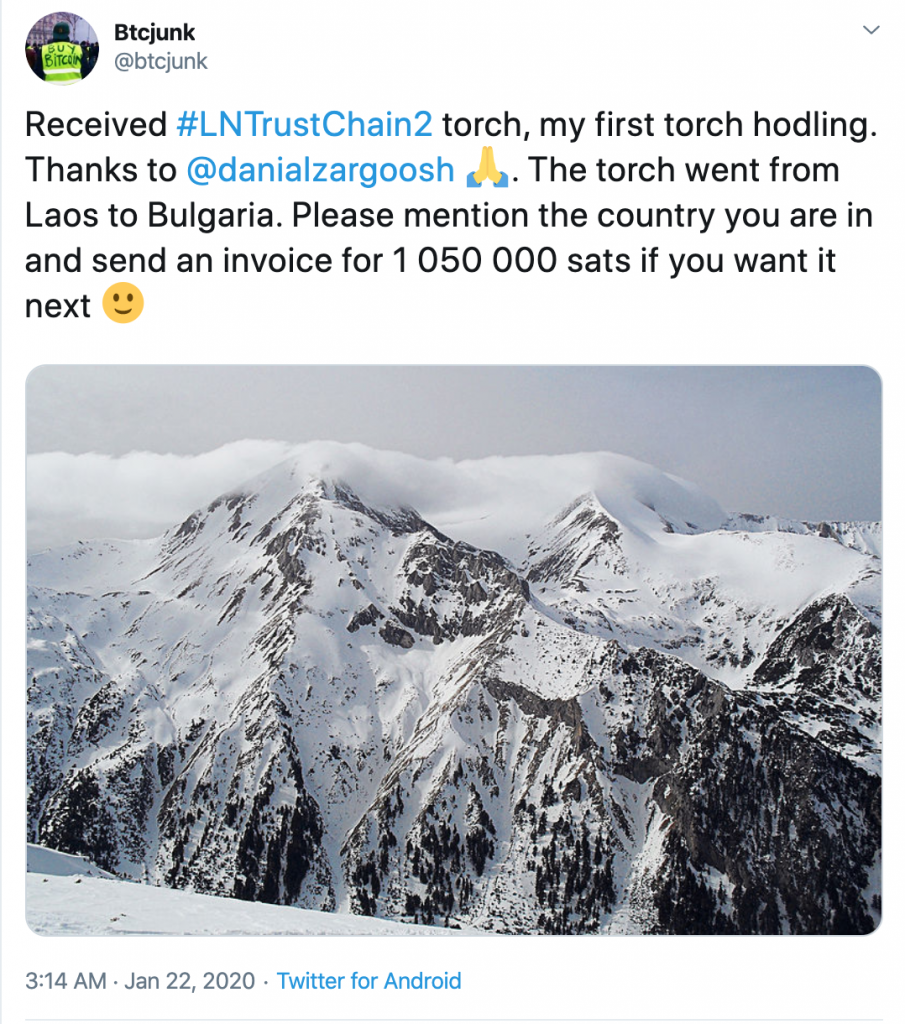 You then go back into your Blue Wallet, click the “receive button,” enter the amount and copy the invoice. Then, simply paste the invoice as a reply to the torch bearer and hope he picks you.

What Does it All Mean?

For those searching for the deeper meaning to all this, the game was designed to raise awareness for the bitcoin lightning network and it seems to be doing a good job of it. More usage of the network also has the added benefit of helping build it as problems can be discovered and fixed and liquidity is built up as well.

In my humble opinion, the lightning network is not quite ready for prime time just yet. There are still a few kinks to be worked out and the user experience is not even close to where it needs to be for mass adoption. It’s a shame too because as I continue to build out Quantum Economics and try to make good on my New Year’s resolution to increase the proliferation and adoption of bitcoin and cryptoassets, it seems that BTC itself is still way too slow for many markets.

These sentiments were recently highlighted by the famous internet pioneer Kim Dotcom in this candid conversation with Tone Vays and Willy Woo….

Clearly Kim is advocating for Bitcoin Cash here and it is a compelling argument but the same could be said for three dozen other shitcoins that are faster and cheaper than BTC. So what’s the solution here?

Don’t get me wrong, I think bitcoin is amazing as is and is already an amazing alternative store of value and means of exchange, especially for people like myself who are weary of the current financial system. But in order to get to the next level and on-board another billion users it will need to adapt from its current form.

I still remember my first conversation with Meni Rosenfeld from the Bitcoin Association when he told me that settlement usually takes about 10 minutes. I thought he was crazy. It it takes more than a few seconds, then it’s not a real alternative to cash as Satoshi proposed.

Many thanks to Metallica for the title of today’s update. Hope they don’t sue me. Thanks for reading.