I’m not gonna lie to you. Bitcoin’s chart looks really ugly at the moment. Mati Greenspan Click to tweet

It’s true that we’ve been in a broad range from $30,000 to $40,000 (orange lines) ever since the mass liquidation of May 19, which may or may not have been triggered by Elon Musk tweets and China FUD.

It’s also true, however, that we’ve been having trouble remaining in the top half of that range over the last few weeks, and even breaking above the 50-day moving average (blue line) has proven problematic.

What’s worse, the downward slope that has materialized over the last few days gives the appearance that gravitational forces are calling for a retest of the red-line support at $20,000, the previous all-time high. 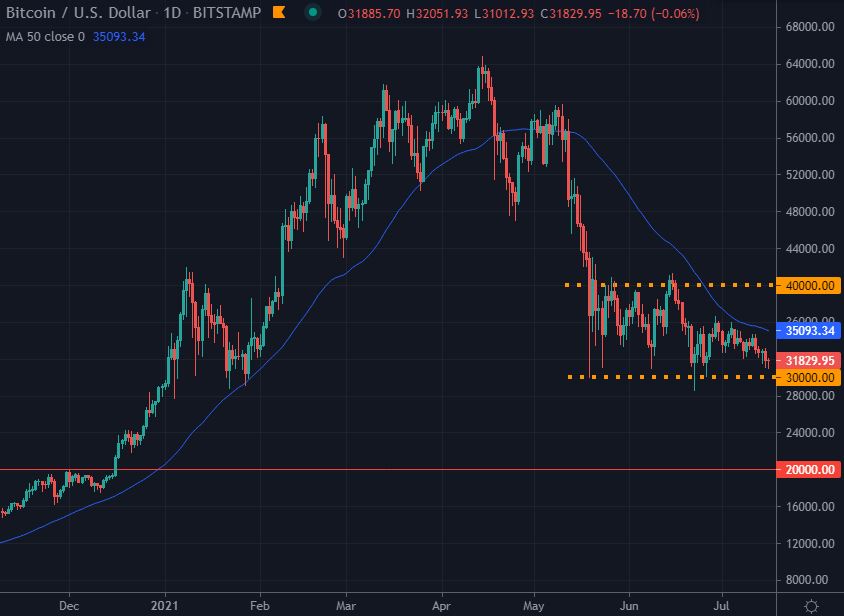 Not to worry, though. A price crash right now probably wouldn’t be a bad thing at all.

No doubt there are many nervous people sitting on coins right now that they’re unsure of, and a break below our present range might just push them out.

On the other side, there are plenty of traders currently sitting eagerly on the fence waiting for a better price to buy in.

A strong move downward would allow those two groups of people to execute their respective positions and facilitate the transfer from weak hands to strong.

In technical terms, this is known as capitulation, a classic example of which occurred for bitcoin in late 2018 marking the end of crypto winter and paving way for the 2019 bull run.

As analyst Jason Deane wrote in an editorial this morning, we need to make peace with bitcoin’s short-term price volatility and slowly stack sats.

Not everyone thinks a capitulation is coming, however. According to an ongoing Twitter poll, only 36.6% of respondents expect it.

To me, it would be nice to see it happen this quickly, and it would ostensibly validate my earlier hypothesis that we’re not in for a prolonged bear market.

However, as you know…

Past performance is not an indication of future results.