Of all the things 2020 will be remembered for, I very much doubt that institutional adoption of crypto assets will be one them.

Yet, it has indeed been the most fruitful year ever in this respect.

I really wanted to thank the random stranger who tagged me in this infographic timeline showing how much we’ve accomplished in such a short amount of time.

A watershed moment for me personally came yesterday while I was writing this daily newsletter for you, Bloomberg blaring in the background, frantically trying to keep up with a news cycle that was clearly eager to return to normal after a long, drawn-out, bitter U.S. election week.

Suddenly and without warning, the hearing at British Parliament that I’d been gladly ignoring grabbed my full focus as the Chancellor of the Exchequer Rishi Sunak clearly and distinguishably stated that they were working on a new charter to regulate stablecoins, and that the Bank of England is researching central bank digital currencies (CBDCs).

The feeling was similar to what I experienced hearing the word Ethereum uttered on the financial news for the first time ever in April of 2017. The thought of “oh wow, this is happening now.”

It’s not just the markets, as the entire world seems to be excited about yesterday’s announcement from Pfizer that they’re on the cusp of delivering an effective vaccination. Mati Greenspan Click to tweet

I’m pretty sure even the anti-vaxxers are happy about this one.

It means we get to return to normal again. This prolonged period of forced relaxation certainly was interesting, and I’m sure in many ways ultimately beneficial, but who among you hasn’t been dreaming of going on a vacation or visiting a bar with friends, or attending a celebration, or even just a party?

Over the last eight months, almost all the new money going into the market wound up in a handful of the top tech stocks, which seemed to be progressing despite the virus, while those belonging to the industries set to be displaced have tanked.

Now that the light at the tunnel has ostensibly been confirmed, this trade is reversing quickly.

Are you afraid of heights?

So the Nasdaq is falling today, while the Dow Jones Industrial Average is rising. It’s not what we’re used to seeing, but hardly considered an anomaly.

That being said, what does it mean for bitcoin?

Well, nothing yet. Bitcoin’s rise was during the weekend, and so far, it’s been consolidating near those incredible highs. 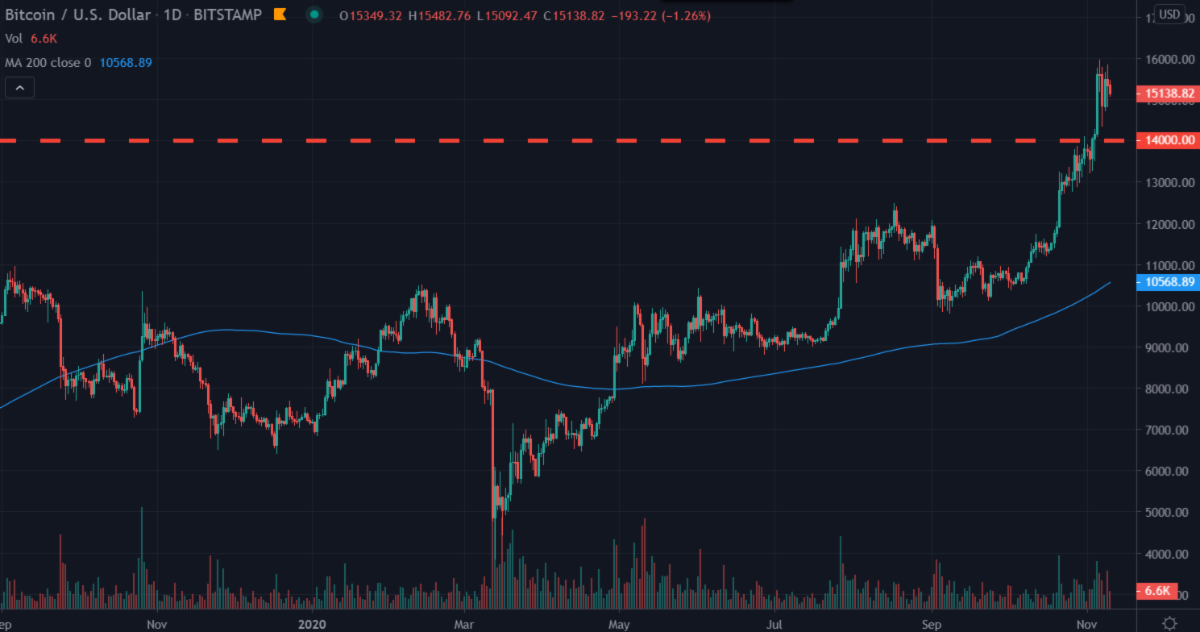 Bitcoin has enjoyed many years of very strong price growth. This year looks to be no different.