This question was covered in a hit song by the great economist singer Merle Hazard back in 2009. The song ” Inflation or Deflation? ” joins other classic hits like How Long Will Interest Rates Stay Low, The Greek Debt Song, and my personal favorite, Dual Mandate.

As the song goes “new money makes inflation if the folks who have it spend, but if it only sits there then the misery will not end.”

Yesterday, Fred updated their snapshot of the Fed’s balance sheet, and as we can see, over the last two months, they’ve created more money than during the first five years of Quantitative Easing, from the time it began in September 2008 through mid-2013.

In addition to the monetary stimulus from the Fed, as depicted above, the U.S. government has provided approximately $3 trillion in aid, including loans and grants for businesses and even helicopter money for the average citizen.

The main difference between then and now is that the original QE plan mostly went to large institutions who parked it in the markets. Therefore, inflation was mostly confined to asset pricing. The type of stimulus we’re seeing today is an entirely different animal, not only in the amount and the speed with which it’s being created, but also that it’s targeting businesses and people who will almost assuredly spend it on goods and services rather than just buying stocks.

As long as the lockdown continues, spending will likely remain low, but once we start going out again and the velocity of money picks up, we could be headed for a prolonged period of inflation. Or not, it’s just a theory anyway.

If Not Now, When?

The data does seem to indicate that the world is reaching some sort of plateau, as the number of confirmed cases each day has leveled off at about 80,000 since the beginning of April. 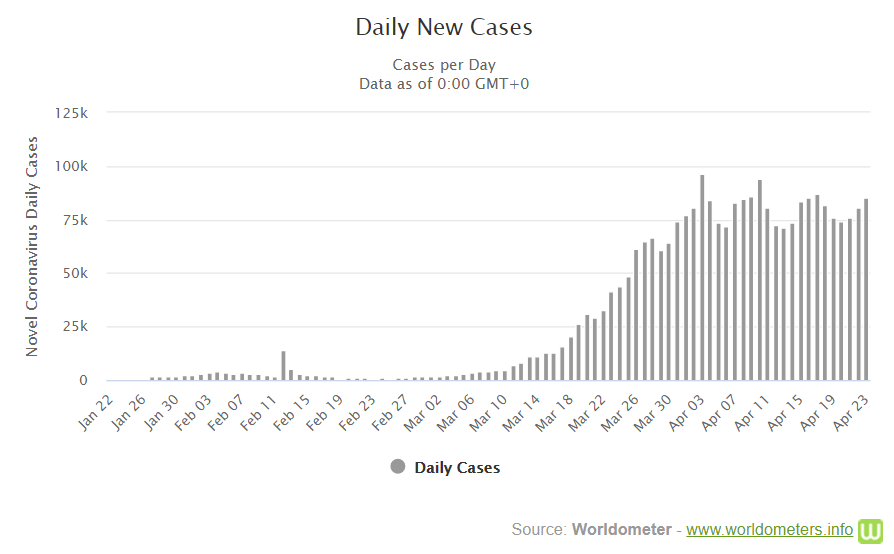 Of course, this could also be pointing to the limitations of testing worldwide. Nevertheless, it is encouraging, and it does appear as if we are finally getting on top of this thing.

If you’re looking for a reason to be optimistic, look no further…. 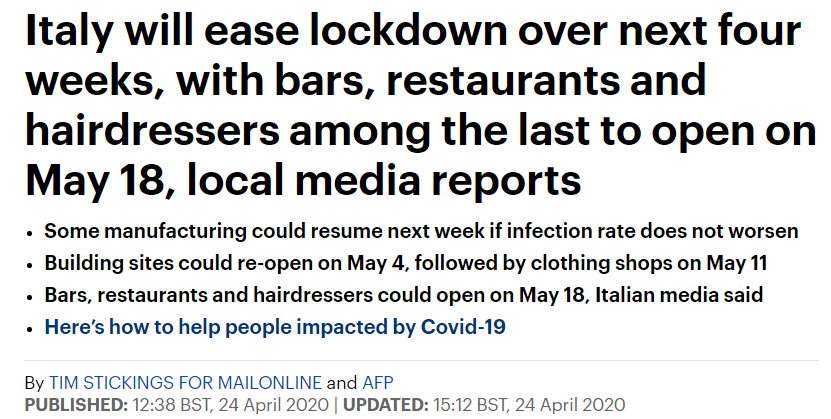 Also, here in Israel, the prime minister has announced an easing of the nationwide lockdown earlier this week. Most businesses are still closed, but at least we’re allowed to go out of the house at a reasonable distance as long as we wear a mask and gloves.

In the United States, where the virus has hit the hardest, it is unfortunately a lot more complex. Things will open back up at different speeds in different places, but it could be a few months at least until we’re back to normal.

With great caution and extreme optimism, it does seem like we’re finally seeing the light at the end of the tunnel. But still, it could be a few weeks before we really know if the easements are working, or if there will be a second wave.

With everything above and numbers that just keep rising, I can’t help but focus on a number that keeps going down. The countdown timer to bitcoin’s halving, which will be implemented in block number 630,000, on or around May 12th no matter what happens with the virus, or the Fed, or North Korea, or anything else in the world.

Some have said that this will be a non-event, and as we’ve previously pointed out, all the news coming out lately surrounding the virus and the economic impact has completely drowned out the conversation surrounding the halving.

I can’t stop staring at the timer as if it carries some extreme importance that most of the world has yet to realize. Mati Greenspan Click to tweet

The price of bitcoin, the chart, and the bullish flag forming just don’t even seem significant right now in comparison.

Yes, I’m aware that the hashrate is about to plummet. Many mining rigs that are barely profitable at this price will be switched off, likely for good. Some miners may even be forced to sell their stash in order to upgrade their machinery, but as far as I see, that only increases distribution, and even if it does happen to send the price down in the short term, it only provides an opportunity to accumulate at lower prices for the long term.

The world needs a stable asset right now, one that can hold value over time and is easily transferable, scarce by design, and decentralized in nature. The halving event is a staunch reminder of this digital scarcity and the inevitable, unalterable course of this young, but no longer clandestine, form of money.