A wise friend once told me that the way to great wealth is to find a loophole in the system and exploit it. Though I never really subscribed to this methodology, it seems that a lucky marketer and his friend, a pizza shop owner, were able to pull a fast one on the DoorDash delivery startup.

This tale of pizza arbitrage explains how the app registered the pizza shop without their knowledge and accidentally listed the price per pizza as $16, when in fact the real price was $24. So they basically just ordered as many pies as they could, over and over again, and never got caught.

The post doesn’t stop there though. Our friend the marketer, author of the tale, fraudster, whatever you want to call him, goes on to describe everything wrong with the current VC landscape and how it’s succeeding in displacing entire industries without providing any real replacement.

DoorDash earned $900 million in revenues for the year 2019, but still somehow ended the year with a loss of $450 million. Now, we don’t really know how much of that was due to our friend, but Uber Eats and Grubhub have similar horrendous balance sheets.

Basically, they’re all spending billions in order to make millions, acquiring new users and market share at a massive loss to their investors without any hope of ever becoming profitable, leaving millions of real businesses to try and survive against an unrealistic competitor, one whose margins simply don’t matter.

They are not the only ones, however. This type of behavior has become quite common in the free money post-financial-crisis environment, where moral hazard has become the order of the day.

Perhaps one of the largest holders of distressed debt in the market right now is a man that I really admire both for his wisdom and humility, Howard Marks.

Marks has been writing his heart out since the crisis began, and for those of you who don’t have the time to read his 10 page in-depth notes, we finally have a summary of his thoughts in the form of a video interview. 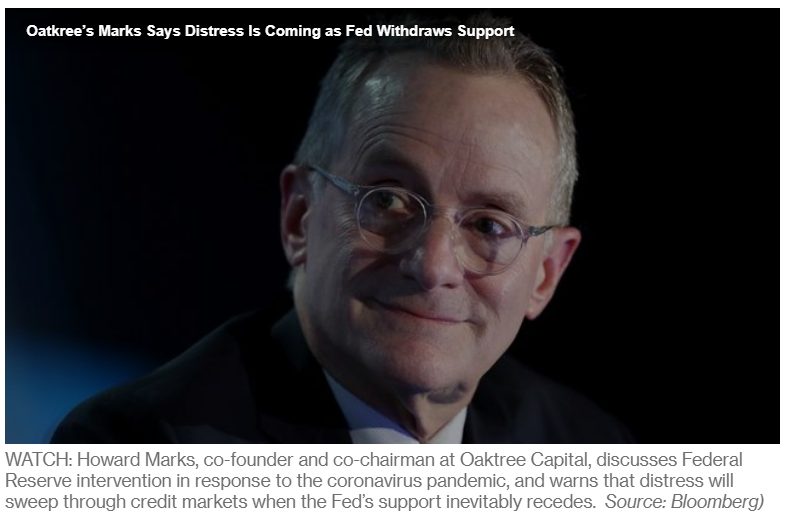 The interview is a total of 40 minutes, so let me quickly summarize…

Marks believes that we are now all equal in our uncertainty about what’s going to happen next. We’re living in unprecedented times, and it is not part of a normal market bullish/bearish cycle.

The great bulk of the interview discusses the Fed and their actions. The end result of endless money printing is moral hazard, the erosion of that feeling of risk among market participants. If you make a bad decision, it’s ok because the Fed has your back. So without that fear, people take on ever greater levels of risk, the culmination of course an end result that is yet to be seen and still unknown.

Perhaps the most interesting consideration is that the current level of stimulus is almost certainly helping, and we’d be much worse off without it, but it does have limits. The Fed can’t possibly be the buyer in every transaction at the current market rates. There’s very likely to be a wave of bankruptcies in the upcoming COVID-19 fallout, and the Fed can’t possibly buy it all, or can they?

Similar to other investors we’ve heard from lately, Marks is standing by waiting for the fallout with plenty of capital at hand.

The price of bitcoin remains stable as we await the difficulty adjustment later tonight. At the time of this writing, it’s only 44 blocks away, and not a moment too soon.

The number of transactions waiting to be confirmed by the bitcoin miners has been piling up since the halving event, and the average fee to send BTC is now about $5.82.

Not that this is a great amount of money. I received a wire transfer the other day of $1,000, of which the banks helped themselves to $52. This is after having to fill out several forms and make sure all the different types of account numbers were inserted correctly and experiencing a wait time of about three business days.

Not that I’m trying to make a comparison. That same $948 that I received, if not spent or invested properly, will more than likely lose even more value than it already has over the next few years, so it’s good that we have an alternative to that system. It’s certainly more risky to hold bitcoin with all of the volatility, but in some ways, I feel like the system is encouraging us to take those type of risks. 😉

In any case, we’ll keep an eye on the network metrics.

So far, the halvening has gone extremely smoothly, but still does not quite seem priced in. Mati Greenspan Click to tweet