You’re not really supposed to feel happy when your enemy gets hurt, but sometimes, doing so is really, really difficult.

Lately, crypto enemy number one has been in political jeopardy, and digital asset enthusiasts are watching with elation.

For those of you who are not familiar, U.S. Securities and Exchange Commission Chairman Jay Clayton is the key figure in the U.S. government who is single-handedly responsible for America’s negative crypto policies. He’s the guy who continuously votes to block attempts to create a bitcoin backed exchange-traded fund.

He’s the one who stated during a 2018 U.S. Senate hearing that “I believe every ICO I’ve seen is a security.” Further, he’s one of the main players standing in the way of fresh legislation to govern the digital asset space.

Apparently, Clayton was looking for a promotion, but it didn’t go too smoothly and now the opposition is calling for his resignation. Unfortunately, it doesn’t look like he’s about to give in though.

More likely, he’ll just stay in that seat until this whole thing blows over. It is nice to know though that he’s looking for a change, and no matter what he does next, we wish him well … though preferably, it would be nice to see him in a place that doesn’t hamper technological innovation.

As far as who should replace him, well, we have a few ideas, but we’ll leave the speculation for a different time.

Something rather strange happened in the stock markets last night that has many participants wondering “what’s the meaning of it all?”

Just as the Asian markets were starting the day, the U.S. stock index futures began to sell-off quite heavily. Social media was quick to attribute the sudden movement to a Fox News interview with White House trade advisor Peter Navarro, who said that the U.S.-China trade deal is over.

After seeing the market reaction to this, Navarro, Larry Kudlow, and even President Donald Trump were quick to walk back those comments, saying that the trade deal is still very much intact and that those comments were taken out of context.

In all, it took the market about 30 minutes to drop a full 2%, and another 30 minutes for it to experience a full recovery. It didn’t end there though, as analysts have been taking this apart all day trying to figure out if this is proof of the markets’ resilience or a sign of weakness.

I thought that the market was fully focused on the coronavirus recovery and beyond worrying about such silly matters as trade wars. Mati Greenspan Click to tweet

From a markets perspective, it is quite interesting to note that the move was felt most strongly in the stock market. Here we can see the reactions, or non-reactions as the case may be, to this ordeal in the U.S. stock market (blue), the U.S. dollar (green), gold (yellow), the Chinese Yuan (red, inverted), and bitcoin (orange). 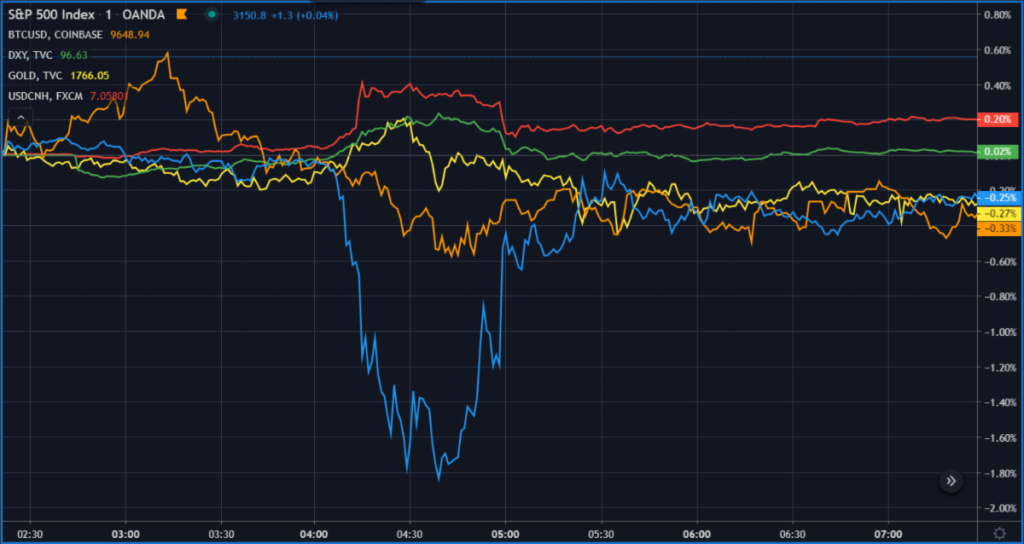 To me, it kind of looks like a cow skull from Death Valley, but you can draw your own conclusions.