Hope y’all had a fantastic weekend. As most of you are no doubt already aware, the very first Bitcoin block, mined by Satoshi Nakamoto, included an encoded message, an image of a newspaper headline relating to the bailouts of banks following the financial crisis.

Over the weekend, our friends at Forbes Crypto asked what message should be included in the last block mined this year. Pretty sure this one should do the trick.

In the U.S. as well, the media seems rather pessimistic about a near-term temporary stimulus package, and with good reason.

2021 will very likely be remembered as the year of MMT (Modern Monetary Theory), the preposterous idea that governments can print an endless amount of money in order to finance their own debt, which is now the basis for policy in most of the world. Mati Greenspan Click to tweet

As Messari pointed out in their recent 2021 crypto Thesis, more economists scoff at MMT than they do at Bitcoin these days.

Yet, only the former has been wholeheartedly embraced by all major financial superpowers. As for the latter, well, let’s just say our list of powerful allies is growing by the day.

If last week was a bit volatile in the markets, it looks like traders and investors have come back this Monday with a hearty appetite for risk assets and technology.

The FAANG stocks are flying today, all accept Google, who had a few issues this morning, but as of this writing, their stock has managed to find its way back to being in the green.

Bitcoin is also leading its peers higher today, as the bullishness in this particular market has resumed with a vengeance.

It’s incredible to see this much bullish action, even as we consolidate near the top.

One tool that is particularly useful for bitcoin right now is the Fibonacci retracement lines, which tell us, given a certain move, what the most likely levels for retracement are, by using Fibonacci’s theorem for finding patterns in nature.

If we trace the movement from $10,000 to $20,000 that we witnessed over the last few months, we can see that the second fib level (green line) has already held as support, and now we are ranging between the first fib (red line) and the top. 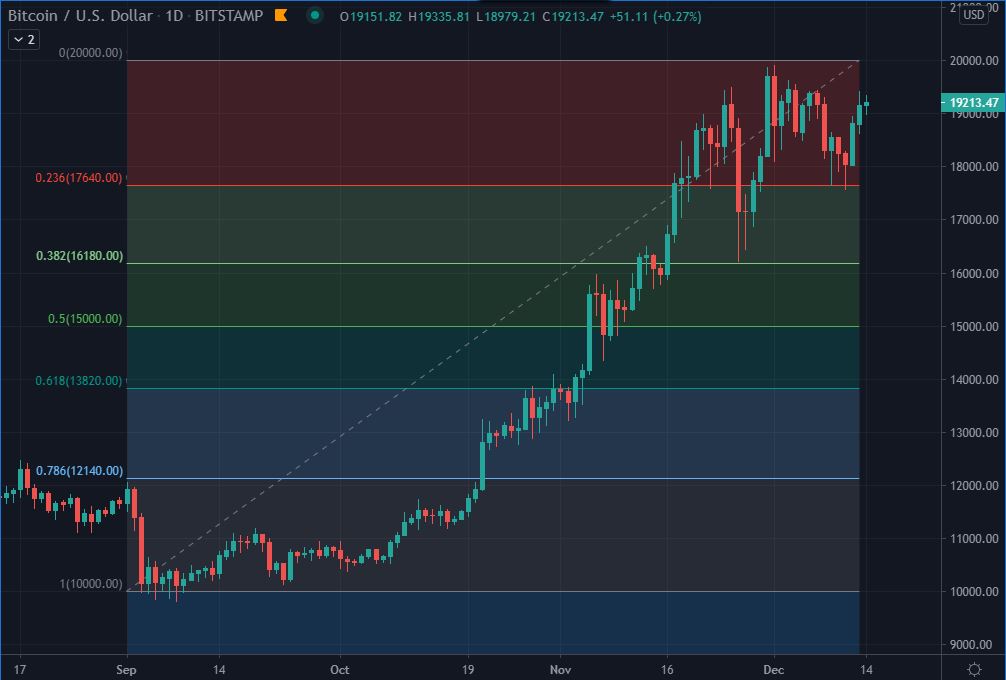 It should be noted that the level of $20,000, which is commonly equated with bitcoin’s all-time high, represents a massive psychological barrier and could likely require a lot of force to break through.

At the moment, volumes across exchanges are relatively light, but price action certainly has a way of influencing that.

If we do see any material breach of our level, we’d also want to check the volume stats at that time to confirm the veracity of the breakout.