Hope you had a peaceful weekend, especially those of you in the U.S., where massive protests, riots, and looting have brought about a crass end to the Coronavirus lockdown.

I’m sure that the highlights we’re seeing on social media don’t even come close to describing the mix of beautiful, touching moments contrasted with senseless hatred and violence that is being displayed across the greatest country on the planet.

Looking at the stock market reaction to the madness on the streets, however, prevents an even bigger contrast, and as the country is burning, stocks are actually going up. Mati Greenspan Click to tweet

There was a gap down when the futures opened last night of just 1%, a gap that has already been covered.

The Nasdaq Composite index is already in the green for the day, and now within spitting distance from it’s all time highest level. Now, the markets do often go through irrational periods, but the cognitive dissonance we’re witnessing at the moment is simply ridiculous. 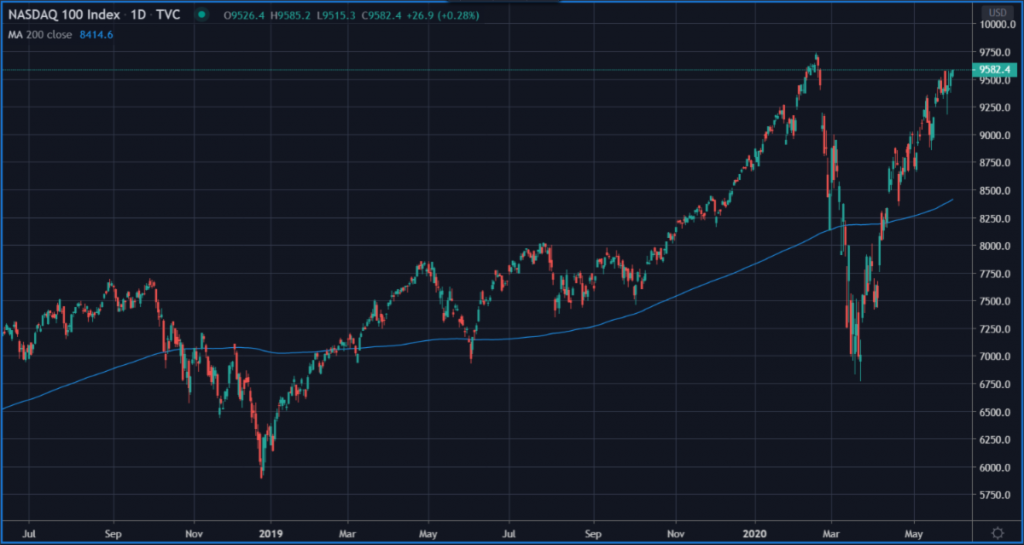 The fact that the markets are traveling higher despite citizens’ apparent pain and suffering only serves to highlight one of the protesters’ main points of frustration, systemic injustice.

The rich keep on profiting no matter what. I even heard one analyst this morning excitedly declaring that the protests are good for stocks because they will “unleash the next tranche of Fed stimulus.”

As much as I prefer not to make any predictions about what might happen in the future, I can’t help but shake the feeling that a great re-calibration may be coming for Mr. Market. I guess we’ll have to wait and see.

A year ago, or two, the prospect of an escalation in the ongoing trade war between China and the U.S. would have damaged market sentiment, but looking at the situation today where stocks are rising despite a two-month economic standstill topped by massive unrest in the U.S., the thought of something like a trade war getting the markets down is almost comical.

Yet, a new study has come out showing a detailed estimate of the cost of trade war, both on the markets and the economy at large. And it isn’t pretty.

Furthermore, an independent study mentioned in the above article was quoted as bringing the cost to the average citizen. From the start of 2017 through 2018, it cost each taxpayer about $374. By 2019, it cost them $461 annually.

I mean, can you imagine where the economy and the stock markets would be right now had the trade war never happened?

Hope you can forgive my facetious sarcasm, it’s just that the same Fed that is supporting the markets now through all these hardships has been glad to support the markets through the trade war. The markets have been rigged for a while now and what we’re seeing now is the culmination of that.

With that, the risk-on attitude and all the Fed stimulus is a huge tailwind for bitcoin and the entire digital asset space. Not only does Fed stimulus have a tendency to send bitcoin higher, as we discussed in this Quantum Economics paper, but the idea that the U.S. is now painting itself into a corner with no way to pay off its massive debt other than debasing its own currency has played quite intently to the narrative of the Austrian economists and hard money advocates who tend to support bitcoin.

Therefore, just like the stock markets, there’s a double catch for crypto. In the case of both high risk asset classes, good news usually sends the price up, but bad news can too. With stocks, bad news can have a positive impact on prices because investors will speculate that further stimulus will come from the central bank. In crypto, the double catch is that if the Fed breaks down or if there is an erosion of trust in government issued currency, then cryptoassets may be used as a fail safe.

Still, it’s quite disgraceful to see a new alt season forming at a time like this, and it only points to the fact that greed is not limited to Wall Street. We’re all guilty at some level, myself included.