Political divides have a funny way of consolidating around polarization.

For example, in the United States the Democrats and Republicans have largely ruled the system uncontested since the 1850’s but before that there have been several other parties in the running. Today, it’s almost impossible for anyone who’s not an Elephant or Donkey to win a national election.

In Ireland over the weekend, something funny happened. A third party has gained a significant share of the votes for the first time in about a century. The final results aren’t due until later today but as it seems, the far left populist party known as Sinn Fein is leading the popular vote. At this point it’s quite likely Parliament will see a three way split.

The results have been a huge surprise to everyone, including Sinn Fein who only ran 42 candidates, which is apparently far less than their share of the vote. A fatal oversight that cost them a real shot at the Premiership.

In any case, they would be hard pressed to find a coalition even if they had more seats as both of the other major parties have already declared their refusal to form a government with the party that is closely associated with the IRA and will likely seek the reunification of the island. Several local political pundits have declared that politics in the region has forever changed.

So… what does this have to do with the markets? Well, for one thing it affects Brexit. Even though the UK has officially left the EU, the issue of the Irish border has still not been resolved. So basically, Boris isn’t having a great day today. Other than that, business as usual.

The markets did get a touch of the risk-off attitude during the Asian and European sessions this morning but it seems that the US markets have no fear.

The official death toll provided by the Chinese government is now at 910, but given some of the footage that’s coming in there’s plenty reason to be skeptical of these numbers. In general it seems that many Chinese citizens are losing their faith quickly.

After speaking with a good friend of mine over encrypted communication, it seems that people in Shanghai have even less information than we do and many are using a VPN to get onto Western social media channels just to see what’s happening. On this side of the firewall however, there’s a much greater chance of fake news and no real way of verifying just how much of what we’re seeing is real. A real catch 22 situation for anyone trying to gauge the economic impact.

Several factories have reportedly gone back to work today but as far as it seems most of the country is still not moving.

As far as the markets are concerned, investors are being extremely optimistic. Judging by how stocks are acting it seems most people think this will all be over soon and the central banks will be able to cover any production gaps with free money injections.

Most telling is that Gold and the Japanese Yen have not been doing much of anything. If there were real fear, they’d be surging right now. The US Dollar has been gaining lately but it would be quite a stretch to try and chalk that up to the Coronavirus. 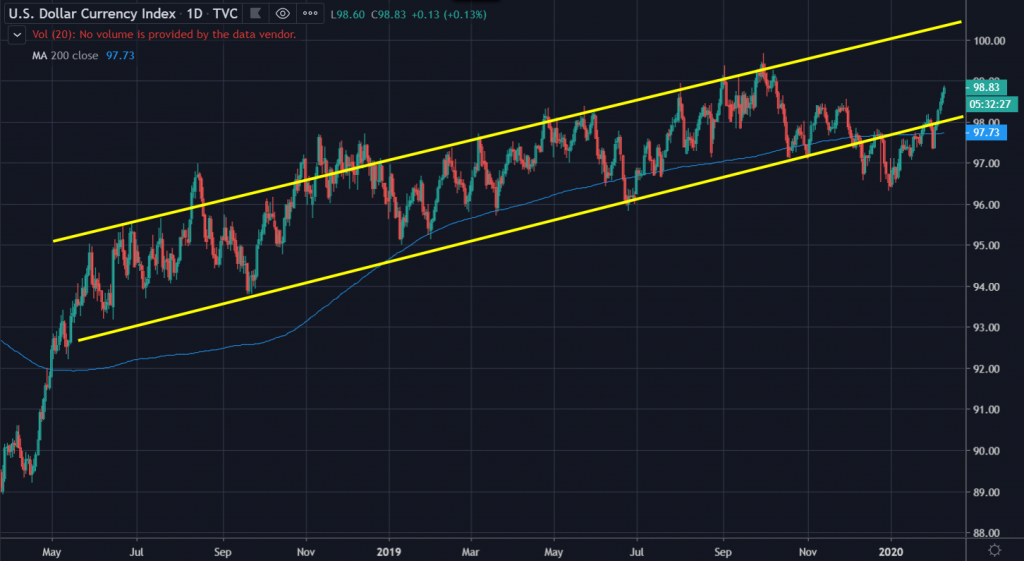 Seems the crypto market is also a bit unsure what to do at the moment.

Over the weekend, bitcoin finally punctured the revered psychological resistance of $10,000 but today it failed to hold that line. Mati Greenspan Click to tweet

No doubt a bit fatigued from all the gains and some, myself included have decided to clip a few profits at these levels.

At this point we’re still looking at an aggressively bullish trajectory. For myself though, I’d like to see where this little pullback is headed before deciding how to allocate. Will the altseason continue or do we see some consolidation around bitcoin before the halving? Or do we look for another test of that 200 Day Moving Average (blue line)? 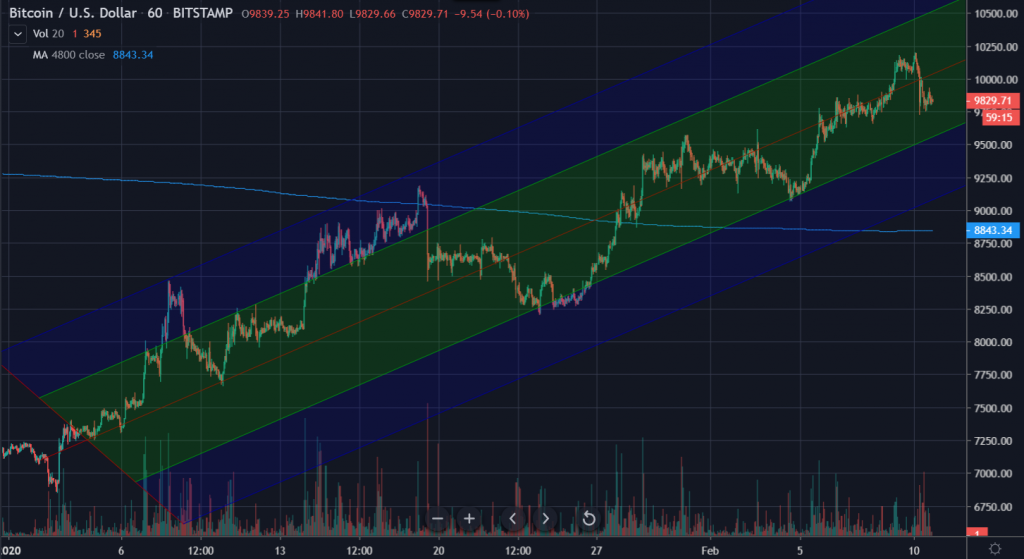 I’d like to apologize for the late update today. Had a great time at the Fintech forum in the Tel Aviv Stock Exchange. Also wanted to see where the markets would decide to give us a clear direction before writing to you but I guess we’re not that lucky. ;-P