By now it seems safe to conclude that Facebook’s project Libra is pretty much dead in the water, but the splashes they made have not just lingered, they have crescendoed into a full blown title wave.

Over the weekend China will open up the Year of the Rat, an animal that in Chinese culture symbolizes economic surplus and new beginnings. A very fitting year for an upgrade to the national currency. Rats are clever, quick thinkers, but also are quite content living in the shadows and would largely prefer their presence to be unknown. Just like the new digital Yuan will be designed to do.

Of course, now that the Chinese are planning to make their home currency more competitive on the world stage other countries are seeing the opportunity as well. In fact, just this week the

European Central Bank has joined forces with the Bank of England, the Bank of Japan, the Swiss National Bank and the Bank of International settlements in order to explore the possibilities of CBDCs Mati Greenspan Click to tweet

Though there are some in the United States who feel it’s a good idea to digitize the buck in order to maintain its current status as the global reserve currency, the White House, Congress, and the Federal Reserve have yet to show any interest. At the moment the top proponent is Crypto Dad. As the former Chairman of the CFTC, Chris Giancarlo has now opened up a think tank to lobby change in this arena.

After speaking with Chris briefly on Twitter, he’s pointed me to their new homepage digitaldollarproject.org but it seems everything we need to know can probably be found in Chris’s op-ed in the Wall Street Journal. 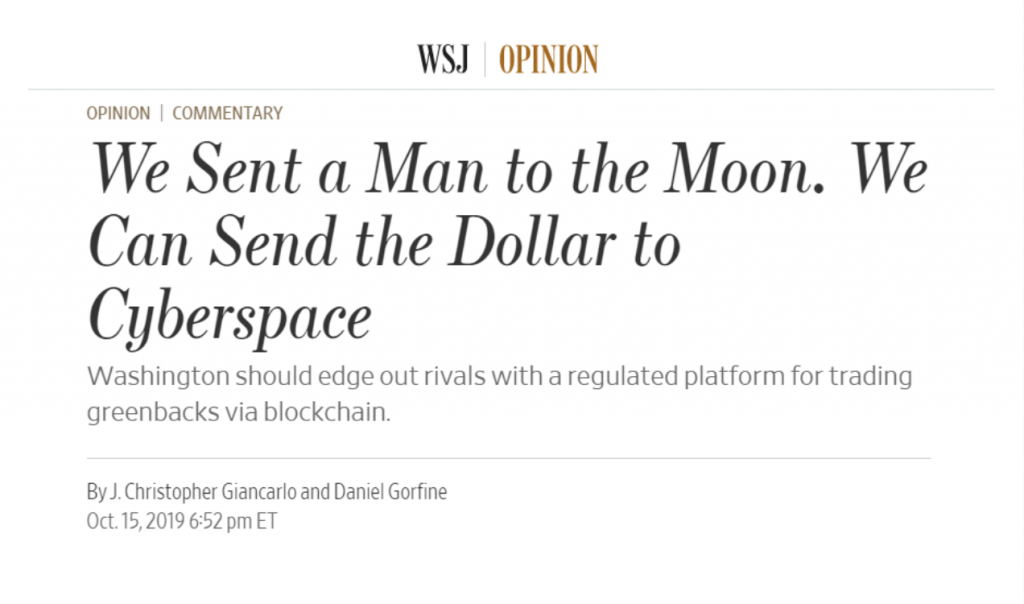 The United States on the other hand, to borrow an old saying, seems to be ‘a day late and a Dollar short’

Even if Crypto Dad is able to somehow reach the Fed with reason and get them to start working on something, by the time they do manage to get anything off the ground it will almost certainly be a step behind.

Just today we have two circulating headlines that demonstrate the rapid development and potential of web 3.0, the Internet of value.

First is from Jack Dorsey who has just won a fresh patent on behalf of Square. Now, the filing does look pretty technical but as it seems, depending on how Square implements this, it could potentially change the way people interact with money.

In short, it will allow the person paying to pay in one currency (bitcoin for example) and the receiver to receive a different currency (USD for example). Square also says that they could extend this service to include payments in other asset classes. Maybe stocks for example or something similar. Which is funny, because according to some recent comments out of Davos, this is exactly what Bakkt is trying to do with their consumer friendly payment app, that should be ready later this year.

Imagine a scenario in the not too distant future to receive your salary in diamonds, paying for your groceries with Tesla stock, and buying a car with partial ownership of your house. It’s coming soon.

I want to apologize for not talking too much about traditional markets lately, but the truth is, with the exception of the Chinese market that is a bit down on the coronavirus, there hasn’t been that much movement lately. One of the main drivers of volatility over the last half a year has been the US-China trade war and now that they’ve managed to sign a “phase one” deal, there really isn’t much Trumpiness in the markets any more.

Just the Fed and their inability to let the stocks fall even just a bit and investors taking that as a sign that they should be piling on the risk.

Here we can see the VIX volatility index, which hasn’t done much at all since September, while the stock markets continue to climb higher and higher into ridiculous evaluations. 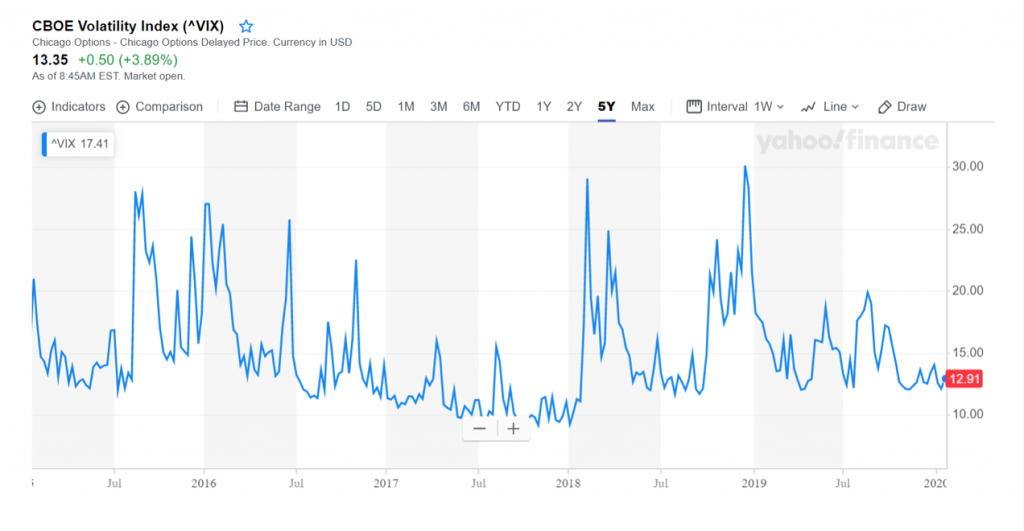 One thing that has caught my attention though is a seemingly reluctant technical breakout by the US Dollar which has broken clearly out of its long term channel (yellow lines) back in December. It is now on its second attempt to re-enter the channel but has also started to form a short term trend (dotted blue lines), which is hard to ignore. 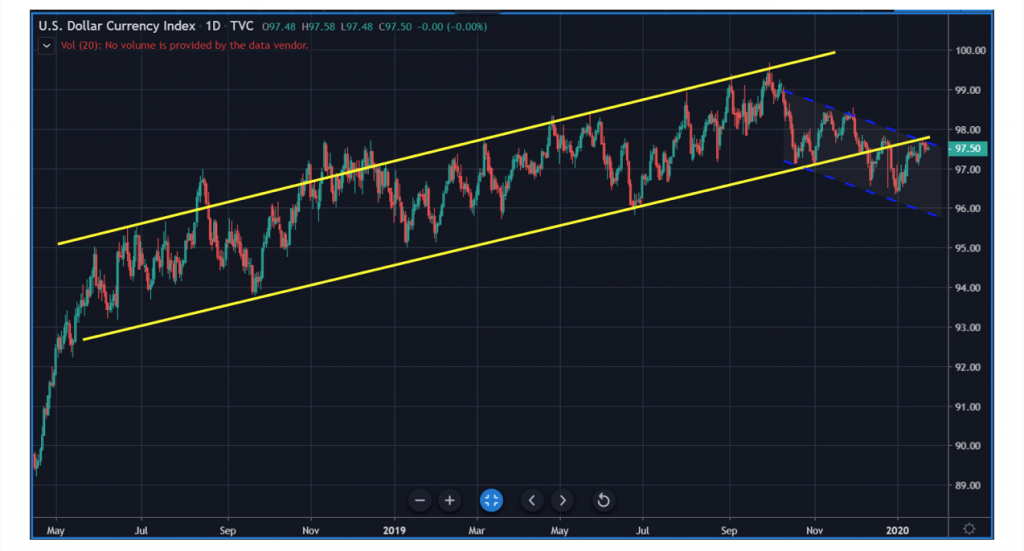 Should it fail to regain it’s previous upward momentum, I doubt very much that it will make a third attempt. Rather, should market volatility pick up again, it could gather momentum in the downward direction.

Don’t forget, gold has been rising, as have the stocks, bitcoin, and other assets. All of which would align with a weaker Dollar scenario. We’ll see how it goes.

Let’s have an amazing day ahead!